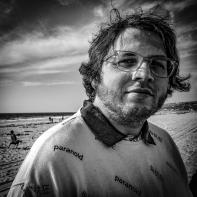 Thomas Gresham, formerly a native Texan, lives in California where he works toward an MFA at San Diego State University. He is an editor for Fiction International. He has had work appear in Carve, Permafrost, Gravel, and Crab Fat. His story 'Peach' recently won the Prose and Poetry contest at Carve Magazine. He has a novel in the works.

Once upon a time would be a horrible way to start this because this didn’t happen once upon a time. This is happening right now as we speak.

So see this: there are like 2 or 3 doctors standing at the foot of a hospital bed. There’s a young woman in this bed. But you wouldn’t be able to tell this if I hadn’t just told you cuz her head is totally covered in surgical gauze. It’s splotched with rust-colored stains from blood that’s seeping through.

She’s awake, listening to the doctors. They’re saying things like you’re very lucky to be alive and things will be different from now on. If you were to walk into this room right now these doctors would get real serious, tell you this is a private matter and ask you to leave.

And this young woman––we’ll call her Iris––will look at you the same way she’s looking at the doctors. Unfocused. Lost in her mind. Because she’s trying to remember all the details of how she ended up here. She would ask you for answers if she thought you had them, but you don’t and she knows it.

She would also tell you that all she remembers is a pair of cracked sunglasses on the floor. And blood. But then those small details bring new ones and she’s starting to see the bigger picture––as they say.

For the sake of this story, we’re going into her head, because that’s what we can do in a story like this, isn’t it? So while we’re here, sitting here, Iris is in the hospital room but her mind is back in the dentist’s office. In the chair, mouth wide and numb, held open by clamps. She’s waiting for a scheduled root canal.

She hears children. She hears dentists and nurses laughing, and somewhere a TV plays a show filled with bleeped words.

Though memory can’t conjure smells, she’s smelling the tang of numbing gas, the gas that makes you silly. It’s a nicely sour smell. In the hospital room it smells like barf and farts and sterilizing surgical cream. There’s the smell of each of the doctors’ cologne.

But Iris ignores these things and takes us with her back to the dentist office, where she waits for the dentist to take away the pain that’s been growing in her upper teeth, the roof of her mouth, her right cheek. The dentist says root canal and she agrees.

And like a TV changing channels, this memory we’re in with Iris shifts and there’s a jump in time. She comes out of the gassy haze to the sound of someone saying You can’t and then what sounds like an unabridged dictionary hitting the ground after falling from like 10 stories up. And then another. And then another.

Someone’s screaming. Could be a man or a woman.

Iris doesn’t move. The gas has her feeling good. Calm. And the clamps keep her pinned to the chair.

There’s the loud noise again. The dentist who’s supposed to fix her mouth falls into the room. Iris can see his head is all messed up. He moans as if someone’s trying to wake him from a bad dream. He rolls over halfway and then stops moving. His sunglasses, cracked, rest on the floor near his head. And there’s blood growing from where his face should be.

This is about the time the Shape steps into the room. It is human-shaped. It has something long and loud and violent in Its hands. Iris can’t tell us what the Shape looks like because it’s blurred, vibrating like a handheld camera shot while everything else is stillwater calm.

She’s still in the chair, he mouth held open. The Shape raises the violent thing, points it at the place in her mouth that’s been causing her pain.

And that’s all she can remember. She doesn’t remember the noise, but she knows it happened because she’s in the hospital, face bandaged.

The doctors show her charts––an x-ray––of her face...or what’s left of it. They say skin graft, bone graft, reconstruction. The amount of tissue missing is disproportionate to the amount remaining. She translates this to Hey lady, most of your goddamn face is missing and what’s left looks like the guts a hunter leaves behind when he field dresses a kill.

She thinks root canal and wants to laugh. But she’s pretty sure she can’t laugh because she doesn’t have the things she needs to laugh.

And here we are. And while we’re here, the doctors are telling Iris that in the remaining tissue in her face surgeons removed traces of cancerous tumors that likely existed in larger, more dangerous concentration. To be certain, they would have to test the tissue cleaned off the chair and counter and walls of the dentist office.

What they’re speculating but can’t say for certain is that the tissue destroyed during the event contained uncommon spindle-cell neoplasms with cancerous anchorage and that had the Event with the Shape––who they keep referring to with the name of her ex-husband––had that Event not occurred this infected tissue could have progressed undiagnosed and could have potentially led to a drawn out battle, pain, treatment, and possibly death.

But again, this is only speculation. One of the doctor’s says There’s a chance that what happened to you saved your life.

So here we are. We’re going to leave Iris in her hospital bed. She will probably live and recover. She will have to overcome the way people will look at her and shy away from her and compare her to a Hollywood monster when they first meet her. But we will leave her to face this alone.

And because the past is just the future illuminated, we can use our graduate-level education to apply a literary cultural theory to this story and see that the Event represents school shootings and domestic violence and gun violence and gun laws. And that the cancer in Iris’s face represents the festering, unrecognized, unchecked need for change that’s accelerating to the surface.

We can see this, right?

So then where do we go from here?