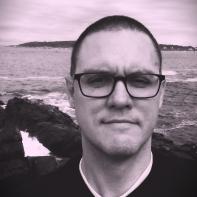 Walk through the doors in eight-inch heels and the pimple boy behind the counter says, Welcome to Big H, home of the pastrami burger with a runny egg, and I tell him if I don’t get some fry sauce my head will explode. You got a bomb? pimple boy stutters as he steps back from the register real slow. Customers looks worried. Like they don’t know if it’s a joke or my last fuck to give. Maybe I got a bomb. Maybe I don’t. The Big H is good eating, explosive diarrhea good, but not spontaneous combustion good. Fry sauce, I tell the Zitmeister, taking out my lipstick and holding it like a detonator. Fresh and thick. None of that piss thinned out with milk.

Lately, some things have happened. The cat spent four lives falling out the window. Scratchers didn’t scratch. Botched dine and dash at the Benihanas. There was a pain in my spleen circuit which the doctor insists is imaginary. I’m agnostic, I say. There’s your problem, she says, and slides two fingers inside me.

Halfway through my set at the Exotic Kitty the school calls to say there’s been an outbreak. Don’t worry, they say, this time it’s only lice. Vic says if I don’t get back on stage I’m finished, and I tell him he can jiggle his tits for these billy goats. Standing outside we watch as the children come marching single-file like miniature soldiers in their blue polos and plaid skirts. Only headless. Where each child’s head should be is a jagged, bloody stump. Stumbling through the doors, they wave.

Later, I tour the gymnasium where the heads are being quarantined. They’re arranged on stools in neat rows. Chewing, laughing, pulling faces. Nurses attend each head, massaging peanut butter on the scalps and running cafeteria forks through the hair in search of nits. The mother next to me is whispering, promising God she’ll be better—she’ll be the fucking virgin Mary, just not this, Lord—but I know better than to pray for a B-side catastrophe.

At dinner my daughter twirls Cup-O-Noodles around her fork. Before the outbreak she always looked like a broomstick with a melon on top, but now she’s just a broomstick. It’s a weird improvement, I tell her. She raises the fork to where her mouth should be and noodles spill on the floor. This happens over and over. But for once there’s no eye-rolling when I call her Princess, no sighs when I launch my nightly egg at the neighbor walking his mutt. She just sits with a hand pressed to the frosted glass window.

The next day she bangs loudly on the door until my ex appears and hugs her gently as she races past him up the stairs.

Now that she’s headless, Princess doesn’t want me to take her back to church. On Sundays she’d rather go to the park and play hide-and-go-seek with the other headless children. They turn in jagged circles, like broken carousel horses. But I still catch her kneeling beside her bed. Is she pleading for the return of her lost head? Or offering gratitude that it’s gone? When I was a girl, I thought God would be my crawlspace, but now I understand he created us so we could be his.

Sometimes the school sends progress reports on the heads. Your child is a genius, the letter says. I read it to the other girls between sets until the ink is smudged with glitter. Before the outbreak, the principal always said in a few years we’d be doing a mother-daughter routine, but now, apparently, Princess’s head does complex math equations and recites Emily Dickinson’s poetry.

The headless girls have a sleepover. I sip fireballs and show them how to fake a pregnancy for alimony and when to use an Oxford comma. I’m not sure there’s more to life than this, I tell the girls, but they’re too busy feeling petals, feathers, marshmallows. All the soft things they can get their hands on. I give them each a tampon soaked in Tanqueray. They keep coming back for more until they slump against the walls. In the morning, one of the mothers threatens to sue me for child endangerment. I give her the box of tampons and what’s left of the Hennesy. You need this more than I do, I say.

How long will the heads be quarantined? I ask the school office. Nobody knows. Nobody tells us anything. In fairy tales time is a hiccup if it is at all, but in the suburbs you feel it like a virus replicating invisibly inside you. The other mothers are frantic, desperate for their girls to get their heads so they can go back to cheerleading and bulimia. Am I a bad mother if I don’t want the old Princess back? Lately, she’s like the daughter I always wanted, helping me pee in Vic’s gas tank and while I pretend to slip at the Gas-N-Go she swipes a pack of cigarettes and Slim Jims. In the alley I smoke until my insides charcoal and tell her having a cunt is like a map of Russia full of weird forests and bears and the more you wander around the more likely you’ll turn into a witch.

Just think, if it wasn’t for the lice you’d be rehearsing for the fair right now, I tell her as we put laxatives in the auto shop coffee machine. I don’t know why they call it a fair. There’s no deep-fried Oreos and no getting finger-banged by Ari Gupta on the Ferris Wheel. Just a bunch of over achievers standing in front of cheap poster boards talking about history. South African Apartheid. Martin Luther and the Protestant Reformation. Harriet Tubman. The Cold War. The Jackson 5 and the birth of hip-hop. Everyone gets a tragedy. Why don’t they talk about the field with the radioactive geese? Or the quarterback turned preacher who resurrected twice? We’ve had four murderers in this town. World-class killers. Nobody’s interested in what’s at the end of their nose. Every year the parents smile and nod and make a beeline for the Holocaust presentation. Last year, Princess had the Mountain Meadows massacre. The Mormons are nice, of course. It’s just that everybody loves the Holocaust.

Yesterday, I tried to convince her to fill the library toilets with goldfish, but Princess would rather be with her headless girlfriends. They ride the bus all over town, leaning close to strangers with their headless stumps. They call themselves the Snow Whites. They say you can feel it when they kiss you and then your life is never the same. Last week a kissed man lactated honey. And the woman with the stillborn babies suddenly spoke the language of crickets. And the man who fell down the elevator shaft had winning lotto tickets in his pocket. People think it’s a trick. If it were a boy with syphilis or a girl with acid splashed on her face they’d call it a miracle. But a kiss from a headless girl is too much.

When Princess was little she kept a pet turtle in a shoebox. Said one day it just appeared. Like magic. Wouldn’t let anyone else see it, but for a nickel the other kids could stick their finger in a hole she’d cut out and feel it. One girl with orange hair like a firebird came to see the turtle every day. When she ran out of nickels Princess let her pay with kisses. Then one day the girl left crying and said what Princess did was a dirty trick. Empty all this time, I heard her say, like she had no idea life is cruel and sometimes we’re cruel with it.

The Zitmeister stares at me. I breathe for the first time in what feels like hours. Blink once if you’re okay, twice if you’re in trouble, he says. He hands over the bag of fry sauce and I can see he’s thrown in a handful of fries. They smell like greasy heaven. Freedom fries, the Zitmeister says. Eat your fucking heart out.

The bus takes me in loops. The sirens get loud then wane. The billboard says I can sign up for truck driving classes at the community college. Or maybe I’ll be one of those nurses who collects blood. I like the look of blood. Who am I kidding? All I want is a kiss from the Snow Whites. One of them is walking up and down the aisle, arms hung limp at her side. I reach out and take her hand and she leans a headless head against my shoulder. Her chest goes in and out with these lonely breaths. Cheer up, baby. It’s a disaster. But at least it’s ours. I reach out and comb the emptiness of where her head should be. Have I told you how pretty your face is? It’s a weird improvement. I wonder if she can hear me. I wonder if I am the turtle or the shoebox. I blink at everyone I see, but nobody seems to notice. The fries are soggy. I chew them until the pulp is a cloud in my mouth. Soft, but never soft enough.

‹ "a swelling" by Nadine Rodriguez up "Mnemosyne, Missouri" by Sahalie Angell Martin ›