A Poem by Ja'net Danielo 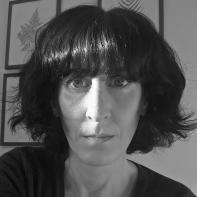 Ja'net Danielo is the author of The Song of Our Disappearing, a winner of the Paper Nautilus 2020 Debut Series Chapbook Contest. A recipient of the Fischer Prize and a Professional Artist Fellowship from the Arts Council for Long Beach, her poems have appeared or are forthcoming in The Shore, GASHER, Mid-American Review, Radar Poetry, Gulf Stream, Frontier Poetry, and elsewhere. Originally from Queens, NY, Ja'net teaches at Cerritos College and lives in Long Beach, CA with her husband and her dog.

My mother said never put new shoes on the table, carry your luck wherever you go. Penny on the car mat, dime in a purse. When a girl shows you her ring, say wear it well. Dark spirits rise from a priest’s missing word, slither their way into bedrooms. A bag of salt will keep them away, each grain a second on the clock. Scissors cut the thread that ties you to them. Don’t lend your clothes to your friends. Women are jealous. Every misfortune: a curse, punishment for some bad deed. So what does it mean that when I was three, I plucked the white wings of a moth from its body, ground it to fine dust between my fingers, never told anybody? That there was a kid on my block who strangled his mother for poisoning his food? What does it mean that she didn’t, that he was later killed in prison? When I was twelve, Tuesday nights, I played basketball in the Police Athletic League at Creedmoor Psychiatric Center, building 70. What does it mean that no Massapequa are believed to buried there, but still, there’s an Unanticipated Discovery Plan for human remains? About me, Ronny, the coach’s assistant, once said, Look at this one here. She’s a bulldog. Nothing gets past her. What does it mean that I carry those words like Natives did dried oysters in winter, like blood beat, keep them like bone currency? That eight years after your death, when I walk past your house, I still believe you’ll come out?