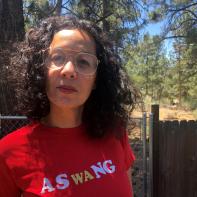 Melissa Chadburn’s writing has appeared in the Los Angeles Times, The New York Times Book Review, The New York Review of Books, The Best American Food Writing, and many other publications. Her reporting on the child welfare system appears in the Netflix docuseries The Trials of Gabriel Fernandez. Through her own labor and literary citizenship, Chadburn strives to upend economic violence. A PhD candidate in creative writing at the University of Southern California, she lives in greater Los Angeles.

This interview was conducted via e-mail by Interview Editor Veronica Gonzales. Of the process, she said, “Melissa Chadburn’s debut novel, A Tiny Upward Shove is a mesmerizing story that follows both the victim, Marina, and murderer, Willie. As a Filipino American myself, it was incredibly touching and exciting to see Chadburn’s prose convey an authentic account of Filipino culture. Her honesty and passion radiates in both the novel and this interview.” In this interview, Melissa Chadburn talks about connecting with other Filipino writers for guidance, the influence of child torture in Los Angeles county’s child welfare system, and taking apart cars.

Superstition Review: Aside from being a writer, you’re an activist who fights against economic inequality and violence, and much of your work highlights those social and political concerns and issues. I find it truly commendable how you use your creative work as a medium for activism. Can you discuss how your activism influences your fiction work and how using fiction in particular furthers your activism, as opposed to other forms of writing?

Melissa Chadburn: Thanks for this. I do feel everything I do is political and informed by my activism in some way. I also feel so much of writing is about finding the right container to tell a story. In this way, journalism or nonfiction could be limited at times in allowing the writer to tell a whole story. That is, to complicate a narrative enough and use multiple points of view, to leap through time, to incorporate a bit of magic—hence, I chose the novel for this one.

SR: In an interview with Her Kind, you mentioned how your writing is “influenced most by whomever [you] read last.” With that in mind, could you describe your main influence for A Tiny Upward Shove? How does having different influences for each of your works allow you to further explore your voice as a writer?

MC: It is true, I’m so influenced by whomever I read last and I’m constantly reading, but for this novel, I’d say Toni Morrison, Gina Apostol, Jessica Hagedorn, are all huge influences, I think Joyce Carol Oates also has some imprint on my voice. My voice, though, is pretty specific. I think, meaning, I think at least I hope, if you were to stumble upon a page of my writing on the street, you’d know it was mine. For Morriso, I was influenced by her process of what she called “rememory,” especially as it relates to mercy and justice in building empathy in the novel. For Apostol and Hagedorn, I needed to make up for a lifetime of not reading or being connected to other Pilipinx authors, as you mentioned in your email there being a dirge of representation, and I find them both to be brilliant yet a bit fun and raunchy. Especially Apostol, I needed a friend, who was not an aunty, who I could call and ask, “What’s a good word for cunt in Tagalog?”

SR: I’d like to talk about the representation of Filipino heritage and culture that your novel spotlights, such as death rituals, religion, and family. As a Filipino American myself, I was excited to see my identity and culture, which is so often forgotten, portrayed in literature. How did you decide which aspects of the Filipino community to share with the world, such as specifically focusing on the folklore of the aswang?

MC: As I mentioned with this narrative, it was important for me to share Marina’s whole story, and that meant including her heritage that dips all the way back to pre-colonial Philippines. The aswang seems like a good vehicle for this. Also, as is a trope for many thrillers, the book starts with the death, that is if you read it one way, if read another way, it starts with a birth—the birth or at least revisitation, of the aswang. I wanted to mess with these tropes and find some kind of fractal intervention on post-colonial narratives and thrillers. I hope I’ve done that.

SR: At the end of the ninth chapter, the title of both the novel and that specific chapter is said by Mutya, Marina’s mother, when she puts a bird stuck in the heater of their home out of its misery. Mutya explains to Marina that she did what they had to, which was to “help a hurt thing on its way—a tiny upward shove.” Could you discuss the importance of this moment and how it influenced your decision to name the novel after that phrase?

SR: Sarah Shun-lien Bynum described A Tiny Upward Shove as one that is “fueled by a wild, jagged energy and an exuberant mixing of cultures and a narrator whose frank, poignant voice will keep echoing in your head.” To the latter, I agree that the narrator is a very distinct and memorable character whose prose mesmerizes the reader. Can you discuss your process in deciding to tell the story through the perspective and point of view of the aswang? Could the story have been told from a different character’s standpoint?

MC: At the same time I was writing this book, I was reporting on a rather harrowing story of child torture in Los Angeles county’s child welfare system. The story was turned into a docuseries on Netflix and I was kind of a talking head expert in the series. Anywho, the parents in that case were sentenced to murder and life in prison, and the people in the gallery rejoiced, and people on social media rejoiced, and yet there was still case after case of the similar types of multiple abuse calls on child in foster care, and I was left to trouble our ideas of justice in this country. Justice and mercy, and in order to tell those stories, we need empathy, and it seemed necessary to access people’s thoughts and memories as a stepping stone toward empathy, which then made sense to use the aswang as a vehicle for that particular project.

SR: Another theme in the novel is generational trauma. For example, in the fifth chapter, “Novena,” the aswang narrates, “Marina’s body, her lineage, had been a battleground, the ways violence hailed upon our ancestors.” The women in Marina’s family all experienced some form of trauma that is passed down, from Maria Lobos to Marina’s lola to Mutya, which allows the aswang to continue in their family line. How is this theme of generational trauma manifested into the aswang, and what is the importance of the trauma affecting only the women?

MC: This is a great question, and I’m sorry I don’t have a better answer aside from that in many times, this is the case, especially as it relates to sexual trauma. Since you’ve read the book, you are aware there is a lot of sexual violence in the book, and that can be difficult for people to read, but sexual violence happens, especially to young women who grow up in foster care, and it was something that was important to capture if I’m writing a novel about a young women who enters foster care. In this same way, multi-generational postcolonial trauma also occurs, and if I’m writing a postcolonial narrative, that was important to capture. I mean the aswang herself was born out of these circumstances. A figure born from Enlightenment and Colonialism, used to threaten women and shame them as erotic savages.

SR: In your author’s note for the novel, you mentioned how the character of Willie and his life is based on the real-life serial killer, Willy Pickton. I found it incredibly interesting to see how your novel was inspired by real events, as well as noteworthy for how much of the truth you were able to incorporate. Can you discuss why you chose Willy Pickton specifically as a foundation for the novel’s version of Willie, and will your future work also take inspiration from real-life events?

MC: I just thought it made sense, that Marina would find herself confronting economic and sexual violence and sex work, and therefore likely she’d find herself on the Loughheed highway, which, at the time, was a nexus for multiple serial killers who preyed upon women sex workers. When I discovered the massive HIV/HepC coinfection rates of IV drug users in the downtown eastside and the limited number of treatment beds available to women and how many of them had gone missing and murdered without much being done about it, I thought it would be important to include some of those aspects into Marina’s narrative.

SR: In an interview with The New York Review, when asked if writing can be taught, you said that good writing can’t necessarily be taught because whether or not it is good is subjective. Instead, you state that “studying the way others have achieved those things, that can be taught.” Can you discuss how you hope your readers study your novel and what it has achieved and what overall messages or lessons you hope they take away?

MC: I often teach my students to take apart essays and short stories the same way they’d take apart a car. To look under the hood and figure out how the thing is working. In this case, the most complicated aspect of assembling this book was the structure, so I hope that if a young writer is struggling with the same thing, multiple timelines and a need for a propulsive plot, that they might find my novel useful in this way.

SR: You have taught creative writing at the University of California: San Diego and journalism at Loyola Marymount University. Currently, you’re a Ph.D. candidate at the University of Southern California’s Creative Writing Program. In your experience as both a student and a teacher, what advice would you give to aspiring fiction writers?

MC: I never would have taken the time to honor my craft in this way had I not gotten sober. I thought long ago that giving attention to my writing was a selfish act. I think every writer needs to hear this: your writing is a gift to be shared with others. Reach for the moon and fall in the stars.