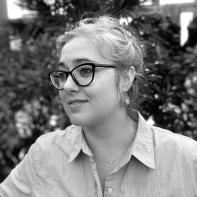 Carolyn Oliver is the author of Inside the Storm I Want to Touch the Tremble (University of Utah Press, 2022), selected for the Agha Shahid Ali Prize, and two chapbooks, Mirror Factory and Dearling. Her poems appear in The Massachusetts Review, Indiana Review, Shenandoah, Beloit Poetry Journal, 32 Poems, Southern Indiana Review, Copper Nickel, and elsewhere. Her awards include the E. E. Cummings Prize from the NEPC, the Goldstein Prize from Michigan Quarterly Review, and the Writer’s Block Prize in Poetry. Carolyn lives with her family in Massachusetts, where she is the editor of The Worcester Review.

Murmuring as with consent
And gleaming as though alight
With a million, with a million
Loops and tassels of scent.

Sylvia Townsend Warner, from “The Virgin and the Scales”

If I promise not to describe
the moon, will you come with me
a ways further into the night?
We’ll wash the forest floor
of ash and find a fairy ring
half eaten, muted crescent
bereft of power. We’ll keep
our distance, braid rocks
to cross the low river, spent,
murmuring as with consent.

Maybe you recognize the place.
Someone else, some morning
gazing up at the lighthouse
growing on the mountainside.
Afraid, you wanted to climb
beyond the spiral of ammonite
slashing your lungs. This time
take my shadow. We’ll sweep
up each crest iced with pyrite
and gleaming as though alight.

We lie at the bend in the chasm,
panting. Below us the minefield
sparkles its druzy teeth
and acres of ears chatter.
If you are cold, uncoil yourself,
huddle in my vermilion
fever. You wanted to taste
oceans again. Further in, I swear
there’s a garden, a pavilion
with a million, with a million—

We’re almost home. Let
your blade go cold and smiling.
Listen: nothing binds us,
neither ring nor rope nor word—
I promised you a moon
without a single ornament
so nothing here can hold you—
not the dark, not even, my love,
the onyx poppies, their iridescent
loops and tassels of scent.