"The Kisses of Winter" by Marcia Aldrich 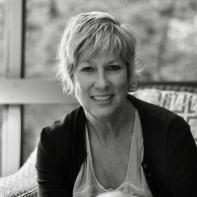 Marcia Aldrich is the author of the free memoir Girl Rearing, published by W.W. Norton, and of Companion to an Untold Story, which won the AWP Award in Creative Nonfiction. She is the editor of Waveform: Twenty-First-Century Essays by Women, published by the University of Georgia Press. Her chapbook EDGE from New Michigan Press is forthcoming.

Oh sure, my aged father and brother-in-law have lightly swept their lips across my cheek’s plane at a wedding or two and my husband has bestowed chaste pecks upon me, but these kisses have been an entirely dry affair—more gesture than act, the lips thin and cool, without substance, without va-va-va-voom. And they’ve been quick, so quick I’m never sure whether they happened or are like a dropped handkerchief retrieved so quickly from the snow as to never have been dropped at all. A kiss should linger; it should take all your blood to digest it, and these kisses don’t linger. If they were visitors, you’d have to say they pulled into the driveway and never got out of the car. A kiss should over brim its boundaries. What I want is excess, bounty, overrunning what the bodybrainheart can understand. A kiss should be so deep it risks being disturbing, so pleasurable it hurts, it should make me forget where I am and who I am. I shouldn’t know where my mouth begins and the mouth I am kissing ends.

Most days I’m resigned to the kissing being over, lost like the green emerald I was once given that fell out of its gold mounting, tumbling into a sewer, washing with the other unbound pleasures of the world to the sea, and there was nothing I could do to stop its disappearance. My hopes have abated. I no longer feel as if my lips have been violently rubbed out by indifference, that I am a woman whose mouth is missing, a white hole where lips should be, an open O. But every once in a while something will make me remember, and I realize I have not entirely stopped missing lips upon lips. There is still something in me hibernating through the blustery years, and waiting to emerge. Mostly, though, I think kissing is for others.

I say this and then stumble upon my senior high school photo where I stand in front of a tree holding a red rose my mother cut from the garden that morning and wrapped in a wet towel to keep fresh and then I remember what happened after the photo was taken. I remember Billy coming to pick me up at the high school on his motor cycle. His long hair fell across his eyes, his fringed jacket hung on his broad shoulders stiffly as if he had taken his fair share of hits and he walked nonchalantly towards me in beat up cowboy boots. He wore a solid silver ring on the index finger of his beautiful right hand that would soon be at my lips. His hands, his hands, don’t get me started on his hands. He was unaware of his hands and that made them all the more moving. I got on the motorcycle by hiking my leg up as if mounting a low horse, then sliding forward on the small seat and folding my arms around the soft leather of his middle. We peeled off down the school’s long driveway on that mild October day.

Where did we go? If I ever knew the location, I don’t remember. I remember the tight turns on a mountain pass, nervously peeking around his shoulders at the oncoming cars, and then parking in a small gravel lot at the entrance to a trail. We hauled ourselves up to the bald ridge unaware of birdcall or blown leaf or loose stones, unaware we could lose our footing easily and fall from a high place. We sat on the rock incline looking out on a ravine and I felt like one of the roses my mother had cut that morning, slim and bud- like, covered in 8 a.m. dew, opening and opening with each successive hour.

Everything important happened that day and yet nothing happened but kissing. We sat on the rocks looking out at the waterfall of leaves and kissed. We lay back on the rocks without our lips parting and did not feel the sharp rocks scoring our backs. All the world was kissing—everything but kissing was trivial, college application deadlines, curfews, brushing teeth—what did they matter? There was just kissing. We walked through the woods, slumping beneath elms and kissing.

What would I give now to have someone’s hands cupping my face? What of my present treasures would I trade to have that—would I trade my job, my house, my home, my horse, my heat?

Where is Billy? Is he alive? Is he pecking at his wife? Is he reminded of who he once was, from time to time, that boy who could barely stop kissing me long enough to come up for air? Is he Odysseus on an epic quest to find the lost kiss? Our kissing didn’t last nearly long enough before we were forced to go our separate ways in November when Billy was hospitalized for kidney or liver failure, like so much else I don’t remember which. After a few weeks in the local hospital, his parents moved him to a facility in a larger city specializing in rehabilitation. He was gone, just like that. All contact with his past associates was severed. Over winter break I tried to see him and got no farther than the front desk. No visitors were allowed. He never looked me up after his release. He wiped his memory screen clean of me.

I was not so lucky. I remembered him. Best not to know what became of him. Once a long time ago when I returned to my hometown for the holidays, I caught myself wondering if the man in the striped overalls and a ring in his ear with a young boy riding his shoulders one aisle over in the Rite-Aid might be him. I left the store before I could find out.

It’s not that my husband and I never kissed. We did. It’s just we’ve stopped. Even when we were kissing, it wasn’t like the kissing at sixteen. How could it be? When we started kissing we were in our twenties and had been kissing a lot of people for a lot of years, some indifferently, some mistakenly, and some passionately. Kissing was not new and it wasn’t everything. In your twenties there were other things to do to one another and with each other. Kissing was a prelude to something else or an accompaniment. And yet we had a period of courtship in autumn, we had a period of kissing—a long dance before we came together, steps slowly coming closer, but slowly. There were obstacles on both sides, hesitations, other people involved. We had to free ourselves from entanglements. I remember his holding a woman from behind, how she fit into the curve of his body. Finally I wanted to be that woman.

We kissed for about a month before anything else happened: outside in parking lots, on street corners, in vacant lots, walking up terraced steps, out of the sight of people who knew us, in out of the way places among strangers. It took us forever to move inside and even then we lingered in the doorway to his second story apartment, on the landing, kissing. Everything was incremental—in the entrance to his building, on the stairs, on the landing outside his door, in the doorway, and then finally crossing over and moving inside. Kissing. All the time kissing. Kissing so much then that the skin around my lips was chafed, even my chin looked as if I had been running sand paper across it. And my face hurt because I was smiling while kissing. Imagine not being able to smile, not being able to make a kiss. Imagine that waste.

This is what I remember.

Will this kissing ever come again or is it gone? And is the person I was gone too? I want to be that woman again, and I want my husband to be that man again.

We required little, just ourselves. The bare kissing unadorned by sex was sadly short-lived, before commitment, before plans being made, before announcing our union to the world, before setting up house together, before marriage and babies and income tax forms and holidays with families. Is that kind of kissing always short-lived? Is it a fragile shelter when two people who don’t know each other’s weaknesses stand together outside time and place where they can’t be touched or crushed? Once a couple has thrown their lots together, set down roots, cleaned house together, docked together in a bed, stood together at the gravesites of parents, siblings, and friends, can that kind of kissing ever come again?

I am driving to pick up my son from soccer practice as I often do when in the distance I see the warning sign flash in front of the railroad tracks as the guard rails lower. Often I have to stop for a train on this road. I stand by my car on the last warm day of November and watch the long rust colored freight train with its worn out box cars come towards me, so laboriously it might be in slow motion. There is no one behind me. The winds are picking up and will knock the last leaves to the ground. Soon as far as my eye will see will be a white waste. Where are the kisses of winter? Who will bring the kisses over the blue-edged ice for me? A bear? A man? A bear-like man? Familiar or stranger? A familiar stranger? Is kissing the page I ripped from my notebook and let the wind carry away? And on that page was that the most perfect poem I ever wrote in invisible ink?