"On the Verge of…" by Laurie Blauner 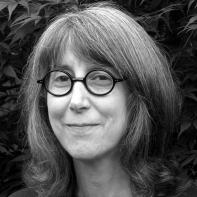 Laurie Blauner is the author of five novels, eight books of poetry, and a forthcoming creative non-fiction book. She won PANK’s 2020 Creative Non-fiction Book Contest and her book, called I Was One of My Memories, will be available in 2022. A new novel called Out of Which Came Nothing is currently available from Spuyten Duyvil Press. Her work has appeared in The New Republic, The Nation, The Georgia Review, American Poetry Review, Mississippi Review, Field, Caketrain, Denver Quarterly, The Colorado Review, The Collagist, The Best Small Fictions 2016 and many other magazines.

On the Verge of…

My father stuffed me into his brown, leather overnight bag, lifted it, careening me back and forth and all around the corners of the dressing room, near my parents’ bedroom. I squealed with laughter. He was gone often, driving to one of his retail bridal stores in another county. This was the most fun I ever had with him as a child.

In a Montana park, pine tops try to begrudge the wind its movement, swaying for me. But it’s the feel of water I want to describe, stuck in a lake’s center, and my limbs drifting along with a slight current, which makes its own odd current. This was a form of dance before I began dancing ballet at an advanced age. My shadow sprawls along with me now, shattering below the lake’s surface. I tiptoe over lake rocks and pebbles. I leap away from the water’s unruliness.

I can’t play a musical instrument, although I tried piano as an adult. I paint a bit to remind myself how red drips or orange brightens a despondent blue, and yellow outwaits all the colors except for black. But I write, words evolving from my hand stuffed into my mouth, that slowly releases them.

I’m patient, waiting to spin my body around my husband’s in order to forget what’s annoying me. I lose myself in touch, fractions of my body startled into feeling, a delicious colliding, becoming weightless. Eventually I return to the phantom of my body.

I can be lost in pain, pleasure, sadness, divisiveness, and more. The list is endless, but sometimes there is just being plain lost, as when I visited Rome. I blurted down ancient streets to find a certain tourist site, The Trevi Fountain, and, wandering, not knowing where I was on the twisting path, I found the Pantheon instead. I highly recommend straying along your way, stumbling onto beautiful statues and parks and other lesser known landmarks of the city, a soup of so many attractions but always with at least one foot in the past. It’s amazing what you can find when you’ve relinquished looking.

I can misplace myself, body and mind, in an unknown city or town, with drugs or alcohol, or emotions. I can evade myself in bits and pieces too, my stalwart friends are wonderful distractors, my kitchen reeks of deeds left undone, my computer flutters with work, or it displays merchandise I might want someday, and my recumbent positions on the couch in the afternoon lead to sleep. Sometimes anger or sullenness arrives like a homewrecker because of a sudden pimple or one small, unwitting, bad thing in an overwhelming day. But there isn’t much I can do about yesterday.

I’m a bad driver, too fast, inattentive, preoccupied. I use landmarks or try to intuitively remember where I am. As these markers change, I grow adrift, which startles and upsets me. Even though GPS helps me, I argue with her/him, depending on my mood. If I don’t want to use their directions, she/he usually begins their tedious recalculating. I fear becoming a spectacle or never arriving.

My last Siamese cat, Dexter, was a stray in our Seattle neighborhood. When I first glimpsed him, I tried to attract him by calling as he prowled around houses and yards. One day I offered him treats, and he ate them from my hand, and then went to live at my next door neighbor’s house for years until they moved about twenty blocks away, across some larger streets. One night at 2 am there was a screeching at our bedroom window, which is about five feet over a window well. Dexter was on the ledge, so we let him inside. When I phoned my old neighbor, she was leaving to go to the Phillipines for a while, and she said, “You keep him.” So we did. When I told my vet that Dexter didn’t like being pilled, she said that he could always leave whenever he wanted. But he never did.

I’m defenseless against time, with skirmishes of exasperated skin below my eyes, between my nose and mouth, with my upper lip curdling, and my neck pouched like parchment. My body sinks, betrayed by promises, air, sun, food, family. My moods are comic desperation or animal expiation. I have a galaxy of scarves, turtleneck sweaters, and convictions and, like the ocean, I’m warm and cold in various positions. Even when cut, my blood seems shoddy. I’m lumpy, convexed, and prone to animals, endearments, and new stories. Will you accept me as I become?

I have serious purposes; reading, writing, justice, walking, dancing, cooking, and attempted kindnesses, but I sabotage myself. I often park my car in the same place when I go somewhere but sometimes I still can’t find it. I grow angry at my body for tearing or breaking or other variations. When my mind adjusts to something new, a pain, a disease, an oddity, my mind tries to rummage through my body to find the right tidbit, to heal it.

My mother is already old at 94. She has opinions and sermons about the supermarket, politicians, my clothes and hair, help, and men, especially men with compliments, which she smolders over. Her doctor supplies her with Xanax and a staggering pile of sleeping pills.

Death is an obstacle directly ahead. I wish Death didn’t talk so much, reminding me. My husband and I, my sister, his twin brother, and our mothers, remain. Do we have much to do or will that fulfillment elude us? We often settle for what we already have. Days loosen too often and run ahead without me.

In Iceland, where I visited with friends one January, there was a restful silence as I crossed festive, rocky beaches, icy hills, and Reykjavik streets. A sinuous and abrupt landscape kept the chill air between my companions and me. Everything was named, often twice, and snow had fifty words of description, one of which could be used as the name for a person. During our trip, the cold wind whispered, howled, complained, babbled, stirred, blathered, and murmured. In the midst of the vacation, summer surprised us for a few days and green grass scavenged through the snow and ice. Scent packed down streams and ridges. Then winter returned like an assassin who knew what he needed to do again.

Earth is moaning through its wildfires, droughts, pandemics, heat, and cold, annihilating orderless creatures. We are choked and repeat our repenting. How the world is made now consists of narrow geographies that aren’t enough, less to gaze upon, clusters of nature that are snared and disrespected. We totter here and there, searching for mysteries and cures, prolonging the seen and the reseen. We try new directions as if whatever we find will be enough to save us.

Gardner Cave in Eastern Washington is limestone, having been part of the sea floor. Crawford Park, all around the cave, extends into Canada. Inside the cave are illuminated and varied voluptuous stones and rimstone pools. The cave resembles the interior of a stomach. But the path is narrow, a place disastered into stalactites, helictites, and stalagmites, a dream space rocked and watered into being. Ed Gardner supposedly chanced on the cave around 1899 when the earth crumbled underneath him and his horse. He allegedly kept his bootlegging business there until he lost his deed in a poker game. To describe this space can only be to say that you strayed into something nearly finished.

Night can hold several things all at once, air, space, a desk, pen, paper. My mind is not contained but is ready to discover whatever it pleases, cramped only by my body, chores, obligations, other needs. I can yodel or whisper onto a blank page. I can skip what doesn’t entangle me. I try to put all the broken pieces together. And, then, and only then, can I return to my body.

I used to hide behind a door and leap out at my husband when he came home until he begged me to stop, saying he might have a heart attack. I believed up until then that we are all sleepwalkers who want to be awakened because after that small fright it’s a little harder to slip back into your old self again. So after over thirty years together I have to find other ways to scare him.

Discontented hats are lined up to choose their owners. The hats briefly fly around people grabbing at them, trying to claim them. One disappears out the door, chasing a poet, another seems to leap towards the freedom of clouds, another sits waiting patiently in a chair beside another that’s asleep. When asked why the hat was hesitating to decide it says that it wonders what it would be like to be an animal, a dog or a cat, how it imagines eating and drinking. It didn’t want to choose an owner either, not until it knew everything it could already do.

Who is that person in the mirror?

The poet writes another familiar book after walking naked in circles around his living room. He tries using his left hand, instead of his usual right one. Nothing jolts him to create something new and refreshing. He’s too knowledgeable about his heart. He struggles for another way to describe it, a frog, a fist, a red fish. He thinks smaller and then bigger. He needs to be astonished.

Even if you think you understand why blue waves rise and subside, don’t mock the ocean.

I can’t explain why I am restless around sand.

Suspect what you can’t see through but also respect what is as clear as possible.

Hear the next world by the words shaped within this one.

If we allow animals to name us, there would be Hungry, No, Good Girl, Bad Boy, Stop, and Let-It-Go.

A glass of time spills out too fast only when you let it.

Be wary of a shadow that stands and gallops with a child on its back.

Attach your wings only when necessary.

Sometimes be the doctor not the patient.

Muscle everything into your quiet place.

Shriek at the memory of the old war but be silent if you are in the middle of the new war.

Listen as water shakes out its rainsound.

Sand, comprehending the language of wind, doesn’t know which way to go, so it goes everywhere.

Trees tire of their wardrobes, so they change them, according to the weather.

Watch and see how air insinuates itself.