"Our Gods That Vanish" by Haolun Xu 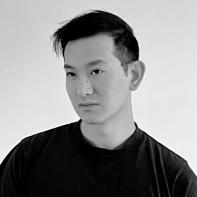 Haolun Xu is a poet and filmmaker born in Nanning, China and raised in New Jersey. His writing has appeared in Electric Literature, Narrative, Gulf Coast, jubilat, and more. His upcoming short film, Long Beach, will be made on the Jersey Shore.

During my junior year of undergraduate college, a bear appeared without any warning, right in the middle of one of the university's most crowded areas. It had happened late at night, when half the campus was asleep and the other half watched with shock and intrigue.

Along with noting the genius timing of the visitor, the school news had reported that week about pictures that caught grainy footage of a shadowy figure, walking along the middle of the campus as if in a daze. Some reports say it was a black bear, but I don't want to discredit the voices who guessed it was a grizzly. It had wandered along the paved little roads near the campus library, presumably drawn by the scent of discarded food dumped into the sidewalk garbage cans.

I remember there'd be busy nights where cheese and bread came teeming out of them, like barrels of cargo. The bear adored it, apparently, and was completely focused on the food rather than the hordes of teenagers and young adults taking pictures of it. It went away shortly after that, dispatched by campus security or luck itself.

Throughout my time at college, I kept trying to find luxury in feeling, despite all the better words for it, tough. I'd watch gangster shows like The Sopranos, memorizing the jokes and scenes after multiple rewatches. I liked how the aging didn't stop James Gandolfini, he was balding and clumsy and completely out of his element half the time when it came to taking care of his family and going through his day.

I'd spend entire nights creating a myth out of myself that year, and as long as nothing broke that track, I could build a good argument. I could convince myself I was some small deity, wandering the streets. It helps to be young, and it also helps to be a man, to find this kind of comfort walking alone at night. If you gave me enough time, I'd be able to convince myself I was different even from my own body.

In one episode of The Sopranos, a bear wanders onto his house property. To add a sense of security to his home, the main character Tony Soprano sends one of his men to guard the backyard, giving him an AK-47 for protection. Little Paulie with his weapon, anxiously sitting on a lawn chair with an assault rifle, while imagining a thousand pounds of muscle mauling him.

At my college, there were incidents of students stabbing each other in a residential area when I was on campus. The news of these occurrences spread quickly throughout the student population, usually through the public safety notification system, or social media. One form of information was usually faster than the other, depending on what you relied on more.

I was a volunteer reporter for a student publication when I heard about the first incident. An editor advised me to go to the scene, before quickly changing their mind. But by the time they had sent me the text message, I had already gotten to the building where the ambulance and police were surrounding the perimeters. As I left just as quickly as I had arrived, an onlooker said to me that the stabbing victim, who later survived their injuries, had gripped an EMT's arm and said, please don't let me die, before the gurney disappeared into the ambulance. Years later, this piece of information still sticks with me, and how being at the scene for only a minute was enough to feel the impact.

Two years later, I had quit the publication to focus on my classes. Another stabbing had been reported just three buildings away from me. This time, all the people in the building went into lockdown, and I sat huddled with a few others in corridors close to the fire exit. Two students next to me, meanwhile, laughed and complained about the stabbing next door.

As the month progressed, I recall other moments, fires erupting more despite the fact that it'd be a cold spring even into May. In my interpretation of this frenzy, the year itself became quite dangerous. I started to flunk classes in German and stopped showing up altogether to campus. I had a quiet fear that at any moment, the roof would fall from over my head. I didn't trust the silence of the old buildings, and how weak the staircases felt on any given day.

There is always an emphasis, as the seasons roll through, that spring is the most dangerous time of year, where even the subconscious becomes aggressive. I had panic attacks if I stayed in a classroom for too long, and I pretended to need the bathroom more than I should've.

I had trouble eating, and went through phases where I was vegetarian or vegan for the week when I did eat easily. There was something about the stabbings that made me adverse to anything involving meat or animal produce.

I understand now, looking back, that I don't blame myself for not being able to focus in school. A part of my mind must've been elsewhere, inspecting every change in the climate. Taking inventory, making sure I could trace everything that appeared, or vanished. The rampaging of the times, the subtle but tangible glow of the unpredictable.

The dining area was so congested at times, that it was common for students to share tables with complete strangers. I think it's easy to meet people when you're in college, because there's a huge chance people are all unhappy, but in a miserable and romantic way together. Someone out there shares at least five strains of frustration that you have, and there's a chance when you two share it, a friendship can sprout. There's always a common enemy, even with no visible goal in sight.

A few months before the bear sighting I sat myself down at a small table where a girl was sitting, legs crossed on the seat, and away from the entrance. She'd been holding onto a piece of french-toast, and I could see it poking out from her left cheek. Slung over her chair was a canvas bag with a Shanghai company logo on it.

We spoke tiny phrases to each other at the table. Half in Chinese, half in English. I think at any given time, I have a list of jokes I use about being American that can survive for around an hour. After that, I pointed to her food and told her I wish I could eat like her.

'Too scared,' I said to her. 'I'm scared I'll get a stomach-ache.' I spoke in Chinese, and in a hurry, accidentally said instead, "I'm scared it would hurt."

One thing led to another, and I ended up confessing that I had been having trouble eating that semester, and could hardly manage a single full meal every day. I told her I felt frightened of myself, laughing quietly out of nervousness.

There was silence after I overshared. Before long, the girl bent over her food to speak closer to my face.

She said, in English, 'You know, I throw it up in the bathroom here.'

There was silence, and I remembered I looked her in the eye. I just sat there, feeling suddenly useless. 'Excuse me?' I specifically recall how carefully I spoke.

She started to pack up her things. 'I eat all day and no one ever notices. No one else can see I'm doing this.'

Then she walked away, leaving only her plates on the table. I picked them up and placed them in the dishwashing section. I didn't ask for her name, and neither did she ask me mine. I watched her leave through the dining hall doors, and I never saw her on campus after that. I wonder how it must've looked, as if two ghosts accidentally sat at the same table, startling each other before retreating afterwards.

The night the bear appeared a second time, I happened to be on campus. I was alone, as usual that year, and I spent my time wandering around the pavement at night writing small paragraphs for class. I'd pace around the buildings, smoking cigarettes. An upperclassman a few years before told me that you could focus better if you moved locations every time you finished a new assignment. I had gone to see two friends who were studying chemistry in their dormitory, right near the large square where the bear appeared.

I was walking out, and in a daze, when I tried to use the back exit to the building. Two strangers were standing near the door as well, looking out of the small rectangular window. It was a young man and young woman, and the man held out his hand to block the exit.

I thought it was a prank. But I remember both their faces, despite the jokes we traded, were quietly anxious. So I stood with them in that stairwell, neither of us moving forward to go outside, as we waited.

Waited for what, I remember thinking. For the bear to leave, for the rumors to slowly hit us that it's all okay now. If anyone was hurt. Only a few hours later would we get a security alert about the incident. We simply stood there in the space, a few inches away from each other.

The young man started to get angry. Not really at us, both also towards us because he felt trapped there. I remember he started cursing with the earphones still plugged in.

'I fucking hate bears,' he said. He hissed at the window and stared straight out.

The girl crossed her arms, and looked away. I too drew my distance, leaning on the white-brick wall of the stairwell.

I pressed my head against a pipe that had been painted over in primer and tried not to close my eyes. I thought it'd be rude. I simply stayed quiet as the man kept talking to us about the wild intruder that appeared that night. As I watched him lose his temper, I heard my own heart beating loudly in the silence of the stairwell.