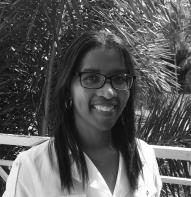 Dorsía Smith Silva is a four-time Pushcart Prize nominee, a three-time Best of the Net nominee, Cave Cavem Poetry Prize Semifinalist, Obsidian Fellow, and Full Professor at the University of Puerto Rico. Her poetry has been shortlisted for the Queen Mary Wasafiri New Writing Prize Shortlist (2021) and has recently been published or is forthcoming in Crazyhorse, Poetry Northwest, Cream City Review, The Minnesota Review, The Offing, and Shenandoah. She has attended the Bread Loaf Environmental Writers’ Workshop, Bread Loaf Writers’ Workshop, Tin House Winter Workshop, and the Kenyon Review Writers’ Workshop. She has a Ph.D. in Caribbean Literature.

At the Hour before Hurricane María

The Medalla and Barcardí rest on the counter
close to the tracking map, slapped with blue ink.

The pens we discovered at that health booth in the mall
are newly giddy with a pedometer and medicine organizer tray.

What is there resembles some morose blackbirds
in slender-throated hangers that cannot engorge us with kisses.

Perhaps we will tuck down as ugly ghosts and stay
holding our breath, until color earth-locks our cheeks.

Or we will twist along the ribs of the Prime Median and
polish the Compass Rose until flamboyáns coax orange fingers.

North will traipse with East and South will dilly-dally with
West, as we work the pens burdened with new degrees.

We’re blue in the face like some upturned blackbirds,
Blackbeard’s kin waiting for a booty of coordinates.

But ghosts are eavesdropping.
Surely, they are rude and ill-mannered,
zones of sour smiles against faithful photo-ops
by Luquillo Beach. But this is not about them.
I’ll go to war, ditch their welcome gifts
by the fashionable shooting gallery
and missile testing site. If they get hungry,
they can breakdance for pastelillos de carne
and coco de agua. If they pout, then I will be
a class act and flesh their care packages on layaway.
Ceiba trees shelter the drive. Their leaves, a bend
then snap that won’t wait until morning, shuffle
inside the grass feet adopted by humans
fighting for our own hiding place.

‹ A Poem by Dorothy Chan up A Poem by Hannah Smith ›