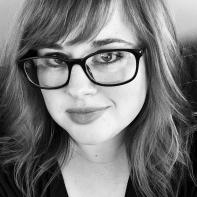 Christen Noel Kauffman is author of the lyric essay chapbook Notes to a Mother God (2021), which was a winner of the Paper Nautilus Debut Chapbook Series. Her work can be found or is forthcoming in A Harp in the Stars: An Anthology of Lyric Essays (University of Nebraska Press), Nimrod International Journal, Tupelo Quarterly, The Cincinnati Review, Willow Springs, DIAGRAM, Booth, Smokelong Quarterly, Hobart, and The Normal School, among others.

fills it with resilience washed down from a mountain
resort, pokes holes in the earth with a pitchfork to watch
miracles cover the voids next to a cow who drops

afterbirth beside a combine. the boy next door hallucinates
Christ, follows him into the river where he drowns and drowns
again until he rises up as a white-tailed deer, disappears

into the sanctuary of blue spruce. it could be called delicate
when a mother serves mac-n-cheese in a flowered China
bowl, ignores the chicken’s scream as she lays her first

child in the grass, all yolk and vincible shell.
we don’t mean to love the pigs before they’re slaughtered,
but once something is named it becomes rooted through

the heart and we hold it in our cheeks like a lemon drop,
sour before sweet before gone between our teeth,
and there we are, too, sitting on an unmarked grave as if

it belongs to us.

you ask me if enough’s been said about the body and the blood
but a tree made a cross (no!) a man turned a tree into a cross

and that is as good as creation, and maybe creation is taking
something beautiful and reducing it to death, into dying

in increments we celebrate sugar filled. when a cow gives birth
there are chains involved, a man with his hands on the feet

of the calf pulling her into soft tufts of hay, as if a mother
doesn’t know how to labor the body down, or the calf

how to measure the earth’s magnetic field. there are worse
ways to die, I say, when the fires ravage forests into

miles of silhouettes, nothing but char in the mouth of a den.
when you ask me if I know what you mean about faith,

I show you a picture of binary stars, never touching but pulled
together the way metaphors usually are, light begetting light

like a pair of revolving eyes, god’s eyes, barycenter defined
as the dark above the bridge. this is where I am, I think –

somewhere in the middle, in a shadow, where I can be myself.
a tree can be a house, can be a blade to spear a fish

from the bottom of a lake where fossils are formed in the wake
of constant change, and this is not creation. this is how the earth

can be without a cross. what I mean is the salmon on your plate
is growing cold, eyes plucked out and tossed.

Discontent, a River, and Ohio

when a witch curses your family, carries a lock
of your hair from Pennsylvania to Ohio,
draws your name with the tip of a willow
backwards into freshly dug clay, remember your
grandmother’s dumplings in a cast iron pot
can sit on the stove for hours, can wait for themselves
to assemble a thickened skin. I’ve drilled a hole
in a suburban Bradford pear in a cul-da-sac
lined with a hundred silver vans only to fill it
with a handwritten note blessed is the hornet, o
spirit of football fields, the same as when
my mother uncursed the neighbor’s dog.
there’s no one here to curse me but my own
broken thoughts, though the string that connects me
to the Brent Spence Bridge is enough to make me
jump from the passenger side door.
I’ve called my familiars to gather at my feet
but maybe I’m alone in this, too lost for even geckos
to climb inside my bed, the absence of the dead
hollow as a harvest gourd. let me fill it with
night sky, the river I’d let carry me to the mouth
of Mississippi, letters to every hand I think I
might hold but this valley has parceled me,

to reassemble myself or be consumed.

‹ Two Poems by Carolyn Oliver up A Poem by Donna Vorreyer ›