A Poem by Nathaniel Rosenthalis 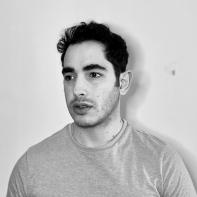 Nathaniel Rosenthalis is a poet and critic, whose work has appeared in Lana Turner, Boston Review, Denver Quarterly, Conjunctions, The Chicago Review, and elsewhere. He is the author of two full-length collections, his debut I Won't Begin Again (Winner of the 2021 Burnside Review Press Book Award, 2023) and The Leniad (Broken Sleep Books, 2023). He is also the author of three chapbooks, including 24 Hour Air (PANK Books, 2022). He lives in New York City, where he occasionally teaches at NYU, Baruch College, and Columbia University. He is also a singer and performer who recently made his Off-Broadway debut.

Often when you thought back you found
yourself in an actual moment like it was a
place.

Your shirt said “Earn It: The Iron Paradise.” It waved in the wind. Even though you wore that shirt as a joke, you struggled to put aside that narrative. You and Dan strode toward a new place, a project for a forest. You eyed his back. Lust can mix equal parts with envy, the way rain gives its equal part to soil for stuff to grow, a basic fact of God’s green earth. Even you know this aspect.

Dan, with music in his ears. You imagined a robed choir swaying for him. Part of you said “No” and part of you said “Do it” when you wanted to ask him to be with you in the moment that was increasingly not forever.

For where you were at, in the earlier midpoint of the first two thirds of your life, Dan’s company seemed a balm for cruelty you’d felt and given equally. Dan removed a bud: “This way is it.” He pointed, with a harder dark nipping at his white Nikes.

You were difficult. Your eyes didn’t adjust to the dense. Or trees. Dan slipped out his phone to show off a new piece. “It’s hard to get the shadows and anatomy right when I work without a reference.”

Dan’s crooked nose enchanged, no, enchanted you. Shorts on, his toned legs were exposed when he scrolled, one foot higher than the other on a rock.

On that slope, you belonged. “It was like really the bug spray on him and his underarm sweat stains and the uneven pattern of his facial hair.” It was a portrait of his X he was pinching. Your fear was you’d never outlast lust. A bluish type of situatedness. The worried look of something about to turn, like in a wind.

“Your ass is pronounced by your pants like a word is by a mouth I can’t stop mouthing.”

Dan grinned. He snapped your pic. Its vanishing point came later. In the background, a beer bottle throws its surface onto you both. You catch some clouds. Or so the surface of the bottle is secondary. You even see those clouds. Green backs some bare leaves.

Except here you were, in a green area. You saw a thought so small you confused it with a snake: “Everybody does that.” The snake could be here and you’d look up nothing about local native species. Then the snake becomes one species and you another, but one set of brackets for beings withstanding nothingness by staying where you are. “So silence happens.” Off trailed Dan.

A high blue sky is all knowledge that one day will disappear. Being now, you found that hard to swallow. He liked it when you did.

You each took off your mesh shirts. Lay in text, each other’s grass. You happened to know you shared several others. Diego, Dennis, etc. You needed to re-interrogate what you expected from an action sequence. You put your shirt back on.

The lake you turned past was empty. That lake’s charisma was its being there. And deep. “I need to piss.” “Do you.” You laughed. You kneeled. His shrug was a force you couldn’t know until it acted.

Let’s skip to where you dared a close-up, putting your left foot on a higher ledge in your bathroom. Just as roses are planted in beds and roses were your father’s favorite flower, two examples, you stayed at yourself in the mirror. A mirror only. Dan was in the other room. So! In you hopped. “That was epic,” he said and rolled over. Like experience does, over everyone.

Back in the park, you watched Dan become a curly-haired head on his crossed arms. The thickening his middle’d do in years had its own dynamic, but you were curious. You toed no fault line that you couldn’t recreate in yourself.

Dan didn’t snore. Someone who’s never painted faces well before gets a sense of ease when told there are several in a scene and so draws strength, and even conviction, from painting the faces different from one another. That’s how you went around. Some people were on bikes, not oppressing the leaves. Some were at the edge of the fake lake, putting lotion on themselves. In a mirror, you’re the same.

You found yourselves later in a garden like fuzz a drain catches. No water will flush it. It has to be emptied. He said, “You are supposed to care about something other than moving through space.” Trash, the low past.

You watched yourself say, “Nothing can be better than being here with you.” He kissed your cheek. You didn’t flush the way you’d seen his pale boys do. Just as some people use words like “therefore” and “however” but make no argument, this vacant lot was circular. The relationship opened.

‹ A Poem by Michael Chang up Two Poems by R.J. Lambert ›