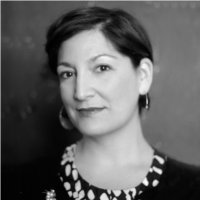 Robin Ekiss is a former Stegner Fellow in poetry at Stanford, recipient of a Rona Jaffe Foundation Award for emerging women writers, and author of the book, The Mansion of Happiness (University of Georgia Press VQR Poetry Series, November 2009). She has received grants, awards, and residencies from the Barbara Deming/Money for Women Foundation, Dorothy Sargent Rosenberg Memorial Fund, Bread Loaf Writers' Conference, Millay Colony for the Arts, MacDowell Colony, and Headlands Center for the Arts. Her work has appeared in The Atlantic Monthly, POETRY, APR, Ploughshares, Kenyon Review, New England Review, and elsewhere. She lives in San Francisco with her husband, the poet Keith Ekiss, and their two cats, Gertrude Stein and Alice B. Toklas.

Andrew Larsen: What brought you to poetry, and what has sustained your relationship with poetry over the years?

Robin Ekiss: I've always been interested in literature, but it wasn't until high school that I started to really appreciate poetry and begin to write myself. I had one English teacher who encouraged me, and took my work seriously - as embarrassingly full of teenaged melodrama as it was. Once I had a taste for it, I was hooked. It's like good chocolate: the more you eat of it, the more you crave it. The more I read, the more I want to read; the more I write, the more I want to write. It's a self-sustaining habit.

AL: Your website describes your affiliation with the AFL-CIO. Do you feel that your work speaks to or calls for the working class hero? How so?

RE: In college, I was a meat cutter during the summers and joined the union. There weren't a lot of women in that field, and I sometimes felt like a spy. But even then, I spent more time in my head than focused on working with my hands. I've always considered myself something of a professional “has been:” I “has been” a water-slide attendant, a TV-commercial scriptwriter, an amateur chef in the final round of a national burger cooking contest, a teacher. Like many poets, I've cobbled together a living in order to carve out time to write, but I generally don't write about those experiences. For me, there's always been a dividing line between my employment and “the real work of living,” between my vocation and my verse. Is writing poetry a working-class profession? Inasmuch as it shares low pay, long hours, and repetitive task mastering. But I don't put much stock in such distinctions - or in any myth of the “hero.” All work - even the work of the mind - can be nose-to-the-grindstone and noble. I'd say my poetry is far more interested in collective, communal experience: what it means to be human.

RE: For me, the personal has always been political, but it's also been my experience that poets make bad ideologues. To write poetry - and to read and truly appreciate it - it's necessary to be open to ambiguity, to welcome multiplicity, to (as Whitman wrote) “encompass worlds” and “contain multitudes.” As a practice, writing poetry is fundamentally anti-fundamentalist: anti-literal, anti-doctrine. It requires skepticism and a willingness to weigh and measure, to interpret. And that, in turn, has greatly affected my view of the larger world and my political stance in it. I suppose it's made me a “literary liberal.”

AL: Your work seems to use forms of motherhood to shape your readership's understanding of the objects and persons in your poetry. Can you speak to the role of the mother figure, either real or imagined?

RE: For me, the idea of “the mother” speaks to a larger question about origins and inheritance. What is means to create, nurture, and shape - and to be shaped - by others. There's solace in that image for me, but also ambivalence. I tend to resist the concept of biological imperatives, but as a woman, it's nearly impossible not to grapple with them. I don't consider myself a particularly spiritual person, but I've always suspected motherhood has more in common with theology than diaper changing - which is why it occupies so much of my creative energy. My own mother looms large in my imagination. But, as someone without children, my understanding of what it means to be a mother has, until now, been wholly imagined and observed. My husband and I are expecting our first baby in March, so I expect that will change.

AL: Your work invokes many great minds of Western civilization like Descartes, Mozart, and Edison. How have these contributions to intellectuals shaped your work?

RE: I've always been interested in creators of all kinds, and in particular, in figures whose work had a great impact on history, but whose personal lives were deeply flawed. Success and failure living side by side. I feel an affinity for that: the desire to achieve, to overcome something in ourselves that's latent. Their achievements are obviously inspirational, but what really interests me are their darker struggles. Descartes' daughter died young, and he transferred his feelings for her to a doll, which he named after her and carried around with him. Edison also had a doll fetish of sorts, wanting to mass-produce a talking doll (an enterprise that quickly failed because the dolls were too heavy for little girls to carry, and when they broke - inevitable because of the new technology - they couldn't easily or cheaply be repaired). I find it fascinating that these leaders in their fields, whose inventions and ideas still impact us today, were essentially mystics at heart. (Edison was a practiced hypnagogic: he'd nap in a chair, holding steel balls in his hands; when he began to fall asleep, one or the other would fall to the ground, awakening him with a start. Whatever he was thinking, he'd then write down, often finding a solution to a problem he'd been working through in that momentary waking awareness. Salvador Dali did this too; he called it “slumber with a key.”) I find their personal stories endlessly engaging.

AL: What piece of advice do you have for up and coming poets?

RE: Focus on your work; if you believe in it, it's worth the effort. It can be hard to stay motivated, especially when there's so much frustration in the process of writing itself, and rejection at the end of it when you begin to send your poems out. But rejection can be motivating too: even if one door is closed to you, every other is still open.

AL: You are married to the poet Keith Ekiss. How has this relationship with another poet changed your work?

RE: Besides our high income-earning potential (not!), a two-poet household has been an ideal living arrangement for me. Sometimes, in the most egregious instances of theft, what Keith says ends up wholesale in my poems. But it's affected my working process more than the work itself. We sometimes struggle to separate “church and state,” to make space for each other's writing needs. Our writing styles, and practices, are very different. He has more discipline than I do, and requires space, quiet, and privacy - while I write more haphazardly, in a state of spontaneity and agitation. Beyond all that, it's a thrill to have a live-in critic, and to be able to discuss poems you've read, or creative concerns and difficulties, and to get advice from someone who's grappling with the same issues. Keith is always the person who sees my poems first, and supports my efforts most. I can't imagine not having that sounding board.

AL: You are very active in the artistic community in San Francisco. How have these experiences changed your understanding of poetry?

RE: I'm on the executive committee for Litquake, the largest annual literary festival in San Francisco, which last year featured about 500 writers over the course of 9 days. Organizing the festival is a serious undertaking, but it's great to be part of a writing community - and to participate in that dialogue. Writing is such a solitary pursuit most of the time, and it's so easy to forget that on the other end of that experience are readers - real people - who share your commitment to language and literature. This year, I was responsible for the Lit Crawl, a literary pub crawl on the festival's closing night, when we takeover more than 50 venues in the Mission - bars, caf‚Äö√†√∂¬¨¬©s, bookstores, an alley - this year, even a beekeeping supply store. There are 300 writers reading over the course of three hours, and something like 5,000 people showed up to hear it all. When you see standing-room only crowds packing it in to listen to D.A. Powell and Troy Jollimore and Rae Armantrout and Dean Young, it's a reminder that poetry is a living, breathing, exciting, performative art.

AL: You've written extensively about the work of Emily Dickinson. Where do you see Dickinson's poems taking root in the 21st century?

RE: Dickinson is, for me, a kind of taproot for contemporary poetry. Her ability to be associative, intellectual, musical, and spiritual at once seems especially modern and relevant. And the way she speaks to the richness and nobility of an interior life, without resorting to narrative, is instructive for someone like me, who's by nature resistant to more overt, and fashionable, forms of confession.

AL: Can you speak about your next project after The Mansion of Happiness?

RE: The Mansion of Happiness takes its title from one of the first board games published in America, a precursor to the Game of Life, and looks at personal and cultural history through metaphors of toymaking and invention. My next manuscript also treads historical ground, looking at the origins of filmmaking. I'm especially interesting in the transition between silent and sound film at the end of the twenties. Silent film poses a lot of interesting intellectual questions for me. Since so many of the films are lost, their silence isn't just metaphorical. It embodies for me one of the chief contradictions of poetry: the desire to communicate our humanity in a culture of relative silence. This all may be just an elaborate excuse to revisit Thomas Edison (since he made so many early silent films). My husband jokes that I'm slowly making my way toward the 21st century. I might be the worst possible cliché of a poet: I really do like to live in the past.