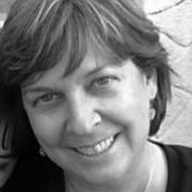 Emily Ferrara is the author of The Alchemy of Grief (Alchimia del dolore), winner of the Bordighera Poetry Prize, which was published in bilingual edition by Bordighera Press in 2007. She is featured, along with the book's translator Sabine Pascarelli, in the winter 2008 season of National Public Radio's The Poet and the Poem from the Library of Congress. She is an assistant professor of family medicine and community health at University of Massachusetts Medical School, where she teaches medical creative writing and doctor- patient communication skills. She has also has published and presented nationally and internationally on the power of writing to foster personal and professional development, and on creative writing as a form of reflective practice.

Encounter with My Ophthalmologist

All these decades of checking my vision
D  A  O  G           E  P  S  V           T  S  R  N
latticed floaters and holy flashes,
pupil dilation, retinal inspection,
fair warning the end's in sight. I shun
then plunder my storehouse of images
and pilfered, reckless schemes envisaged
This turning inward. I am not yet done,
nor wish to surrender, yet wonder
what could cure my aging, worn-out eyes?
Were I to be photographed by Man Ray
he'd lay a path of tears along and under
my lacrimal bone, trace the trajectory
of all I've seen, of all that is left to see.

Last night, the sky was awash in the way of milk, swathed and swaddled stars in primordial velvet. The Dippers, Venus, even Pluto that sham planet. We ambled through quietude, my dog and I: muted streets, luminous houses, shadowy plots we'll revisit in daylight. Walking the neighborhood, we picked up a scent- pure and heady and vital- passed through mystery to gardens of night jasmine, honeysuckle, lifting on air. Hallucination, I thought. This could be bliss, reality superfluous. So much depends on a red wheelbarrow, rusting in the flummoxed moonlight. The scent persisted a block or two, what joy! The universe in its perfection-broken, boundless, ephemeral, without end.

In the Land of Ogham

The sky is laden with words
that sunset speaks, carved
on ogham, primordial pillars
of stone, stained and notched
in the early times. Beehives rise
like spores on matted hills,
the Blaskets bask far in fog.

Laid bare, those rocks could be
lichened lovers, a preservation
of innocence before the fall
all love withstands, one way
or another. In the walled garden
callalilies edge the burial ground,
eighty-one iron crosses imprinted
with time and clouds.

Had there been sun, we would be
standing in the shade of copper
beech, let loose from death.
Distant purple-red bells of fuschia,
wring pain from silence, soothe
long-held wounds, murmur in
the language of trees, feda, birch,
alder, oak, willow, ash, yew.

The standing stones are Ogma's gift:
tongues unfurled to release torrents
of divination, wisdom born of ashes
from the fallen Tower of Babel.
We belong to ourselves here, and to
the ancient runes, the clochaun hut
built stone upon stone, its single
rectangular eye unblinking on the world.

At the Bridge of Sighs
a crumpled doña lured me,
helpless as a fetus. I could not bear
the Doge's Palace, striped gondoliers, gold-
threaded glass. Her skull tamped the ground,
arms outstretched. I gave her nothing
but this etching of words
she will never see. In the City of Light
between the mouths of the Po and the Piave,
I masqueraded in my skinbag
superluminal, fell headfirst
into the canal, a stinking tour de force
of flapping lapping luxury.

‹ Four poems by Deborah Bogen up "Ode" by James Kimbrell ›