"Spirit of '76" by Christine Steele 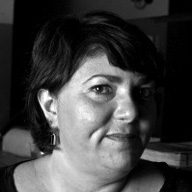 Christine Steele has written for daily, weekly and alternative weekly newspapers in Maine, New Mexico, Colorado and Massachusetts. She is currently the Bureau Chief, editor and lead reporter for the Silver City Sun-News, in Silver City, New Mexico. She is responsible for planning (and sometimes writing and shooting) all local content in this seven-day daily zoned edition of the Las Cruces Sun-News. She has a BFA in creative writing from the University of Maine Farmington and is completing her MFA in creative nonfiction through Goucher College's low-residency program. Her thesis is a memoir about growing up punk rock and living on the streets of D.C. and N.Y.C. during the hardcore heyday of the early 1980s.

I was a chubby eleven-year-old in the fifth grade at Lakeside Elementary in 1976. “Flat-Top” Flaherty ruled the roost back then, walking the halls in her two-foot high beehive hairdo. Her voice boomed over the PA system, sounding just like the teacher on those Charlie Brown after-school specials, “Wha-wha-wha-wha.” It was the bicentennial year and we all lined up on the school's front lawn for an assembly. I put out my palm to receive a silver commemorative coin encased in plastic.

My mom was still dressing me back in '76, so I was probably wearing something brown, plaid and polyester. The Bay City Rollers were big, which may have explained the unfortunate appearance of plaid in the fashion world. I loved their Scottish accents, shaggy hair cuts, and yes, even their plaid pants, and I loved to sing along to “S-A-T-U-R-D-A-Y NIGHT!”

Mom worked a split shift in those days so she could be home for us kids after school. Work for her was the tire store down at the mall where she balanced the books and joked with the guys, chain-smoking Winston's while tapping out the day's figures on the ten-key adding machine. Every afternoon at two o'clock she would drive the few blocks home to our little suburban Cape and make supper for Suzy and me before heading head back to work at five p.m. Suzy and I would sit cross-legged on our plaid-carpeted living room floor and eat our Kraft macaroni and cheese, or canned chicken and gravy on toast, off our plates balanced on our knees while watching Happy Days —The Fonz was our idol—or The Brady Bunch.

It was the year of the Tall Ships Parade in Boston, the year the Queen came to visit, the year we found out that the gases from aerosol cans caused damage to the ozone. Busing in Boston had left the city in high tension, and across the globe there was rioting in Soweto. My friends and I were doing the Hustle and singing Captain and Tennille's “Love Will Keep Us Together” while the U.S. Navy was testing the Tomahawk cruise missile.

I liked listening to the Rolling Stones back then and wearing my black Stones shirt with the big lips on the front and climbing the tree in my front yard. The tree was a good-sized maple with a thick arm of a branch that dipped just low enough for a tomboy like me to reach. I would pull myself up and sit in the “Y” of the strong branches and look out over my neighborhood.

That was the year I played Starsky and Hutch with my friends, and I always got stuck playing Huggy Bear, the pimp, parading around the house in my mom's full-length rabbit coat and funky hat, and pretending to smoke one of her long brown More cigarettes. I always hated that I had to play Huggy Bear, but blue-eyed, blonde-haired Debbie was the obvious Hutch and Heather always won out on Starsky because her dark brown hair was longer than mine and feathered back more like Starsky's did.

Baseball was my life back then and opening day at Fenway was more than just an excuse to get out of school. My mom's best friend at work was this guy named Ozzie and we used to go to games together, just like a real family. My dad worked the second shift in the city, so he wasn't around to take us to games but he hated baseball and wouldn't have gone even if he could. Ozzie was young and laughed a lot, and I always suspected that my Mom and him were more than just friends, but I never saw them do anything more than drink beer together and laugh and talk about work and baseball. It wasn't the best year for the Sox, but we were still riding high from the year before when they made the World Series even though they lost it to the Cincinnati Reds.

That was the year I first got a crush on Butch Hobson, the new third baseman brought up from the minors for his first full season with the Sox, and at twenty-four he didn't seem so old to me. They had the greatest lineup that year, with all my favorites like Butchie and Jim Rice—who could always be counted on for a homer—Carlton “Pudge” Fisk, Fred Lynn, Carl “Yaz” Yazstremski, and my other favorite, “The Spaceman” Bill Lee. The Spaceman was always making the news for something or other, like his wild outbursts on the mound or his cursing out the Yankees.

One time The Spaceman said the bullying Yankees were like “a bunch of hookers swinging their purses.” Yankees manager Billy Martin paid him back the next year, sending him a dead fish, Mafia-style, with a note that said, “Put this in your purse, you no-good —.”

Then there was the famous brawl on the field that spring that left The Spaceman with an injured shoulder. Some said he was never the same again. That just made us hate those Yankees even more.

It was rumored that The Spaceman sprinkled marijuana on his breakfast cereal or put it in his pancakes, and since I didn't know what marijuana was back then I wondered more about how it would taste than what it would do. Even though we finished third that year, behind Baltimore and those despicable Yankees, we were proud that a bunch of our boys made the All-Star team: Fred Lynn, Luis Tiant, Pudge Fisk and Yaz, the old man at thirty-six. Thurman Munson was voted MVP that year and I loved him even though he was a Yankee, and I cried when he died a few years later in a plane crash.

Baseball was great back in those days, before all the strikes and walkouts and multi-million dollar contracts, back when players became heroes both for visiting sick kids at Children's Hospital and hitting a homer in the bottom of the ninth.

When I wasn't watching the Sox lose, I was watching Tommy Buckley, the first boy I ever kissed, play for Comer Electric down at Lakeside Field less than a mile from my house. I would ride my bike down and sit in the bleachers eating french fries with my best friend Kathy, quietly cheering Tommy on from afar. Before the season was out he had walked me home the long way, around the block so my dad wouldn't see. We held hands, and he gave me my first kiss, in the middle of the street by the mailbox at the end of my block.

That was the summer of block parties, barbecues, and backyard carnivals where we raised money for Jerry's Kids to help fight Muscular Dystrophy. The fireworks were spectacular that year, exploding like rockets over the Charles River while conductor Arthur Fiedler led the Boston Pops in Tchaikovsky's 1812 Overture in that patriotic Fourth of July concert on the Esplanade.

Everyone got along back then, or so I thought, and it wasn't until years later when I ran into a friend's mother from the street that I learned that everyone hated the McNultys, our next-door neighbors, because of their pompous snobbery.

“The Nelsons,” we called them, my sister and I, as in Ozzie and Harriet, could do-no-wrong Nelson, with the swimming pool in their backyard in the summer and the skating rink in the winter. But in the summer of '76, none of that hatred was apparent yet, at least not to Suzy and me.

Jimmy Carter was TIME's “Man of the Year,” and all I remembered was that he was from Georgia and grew peanuts, and I thought vaguely that he was shaped like a peanut. But we were hoping he'd be better than Nixon, who had disgraced himself, but I wasn't exactly sure how. I just remember standing in my dad's finished basement, wearing my striped pants and watching the news with my dad as we ate Chinese food—chicken wings, pork fried rice and boneless spareribs, always the same thing. And my dad, whistling to my mom like a dog, to come pick up the plates when he was done, or to heat something up if it was cold. They were loud, piercing whistles that would carry up the basement stairs and invade whatever peace you might be having. It wasn't too many years later when he would whistle for me like that, and I would hustle down the stairs to avoid getting a beating, and nearly trip over the dirty laundry that was usually strewn there, or hide in my room, pleasantly stoned, trying to avoid detection so I wouldn't ruin my buzz or get busted.

That was the year I started running away, only to friends' houses at first. There'd usually be some yelling and the crack of a slap as my dad's palm connected with my cheek. Then I'd run as fast as I could, stomach churning, face red and stinging from the blow, all the way to Karen's house down behind Lakeside Field. Karen was poor and her house was shabby but her mother always opened the door and let me in without a word whenever I showed up on their doorstep.

That year was the beginning of the end of something, and I knew that then, even if I couldn't tell you what it was. I rode my blue bike with the monkey handlebars and yellow striped banana seat in that last Field Day parade, blue and white crepe paper streamers fluttering behind me in the wind.