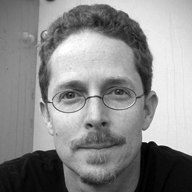 Keith Ekiss is a former Wallace Stegner Fellow and Jones Lecturer in Poetry at Stanford University and the past recipient of scholarships and residencies from the Bread Loaf and Squaw Valley Writers Conferences, Santa Fe Art Institute, Millay Colony for the Arts, and the Petrified Forest National Park. His first book, Pima Road Notebook, is forthcoming from New Issues Poetry & Prose in 2010.

-after Richard Avedon's, In the American West

Let's begin with the Coca-Cola
belt buckle: topless goddess in bronze, breasts
exposed along his waist, symbolizing?
Danny's hand
cradles Christine's face, there's a child
I imagine between their likeness-
a nose that meets between his bulb and her button.
Necklace pendant, pewter heart.
Same blonde bangs,
knifeblade crease of skin around the eyes
predicting rougher weather, striking mines.

If Avedon Photographed My Father

Yellow teeth, he quit the Dutch Masters,
swapped cigars and gin for heart medicine.
Eyes tired by years of negotiation.
The look of self-made men: he's done it,
survived, and he's waiting for his son
to join him.

To the child, traffic seems angry-
strip mine, strip mall, strip club.
His mother stops at the Circle K
to pick up matches and smokes.

Static of rain clutters the windshield
like information. If there's no water
in the river and the river is dammed,
this is sickness. Spring rain ripens

prickly pear they never learn to eat.
The child thumbs a picture book:
The Great Explorers. He knows Spanish,
translates Head of a Cow, funny name

crowning a man so famous. Lost
in the wilderness, he witnessed
the terrible beauty of lightning-struck
mesquite, took the natural fire as sign:

Christ of the Blistering Tree,
whose ash rained over his upturned
palms. No seven cities of gold, no treasure
buried beneath his bleeding feet.

Up and Down Picacho Peak

beneath my feet map the landscape's
vastness: both sides were lost,
hadn't meant to skirmish. If they almost died
of thirst, there were too many reminders

of water: palo verde swim in yellow and bees,
the peak curls like a wave about to break.
An easy climb, straight up through granite cliffs,
unlike this history. Slaves the territory

sought as soldiers to flush out Apache,
and keep the mines humming. I reach
the summit quickly, scenery and scent:
ploughed cotton fields, dead volcanoes.

I turn my back on the freeway. The better idea
of the West, arroyos toward the Sawtooth
range, no roads find it- beauty like stillness,
though it never lacks thorn and edge.

On the way down, I skip the marked trail,
drift along the ridge: the animal spine of it,
the broken back of it. Switchbacking starling
nearly spears my hair. I chimney lower,

careful for pincushion needles, thinking
as I lose my way slowly: hard to believe
they fought for this, shins cut, shaken
into laughter, already full of the story.

‹ Four poems by Kathleen Hellen up "As A New Mother, I Read About the Reincarnation of Lakshmi" by Kelli Agodon ›