"As A New Mother, I Read About the Reincarnation of Lakshmi" by Kelli Agodon 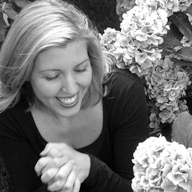 Kelli Russell Agodon is the author of two books of poems: Small Knots and the chapbook Geography. Her work has been published in the Atlantic Monthly, Prairie Schooner, Notre Dame Review, North American Review, Crab Orchard Review and Image. Her work has been featured on NPR's The Writer's Almanac with Garrison Keillor and in Keillor's second anthology, Good Poems for Hard Times. Born and educated in the Pacific Northwest, Kelli is a graduate of the University of Washington and Pacific Lutheran University's Rainier Writers Program where she received her MFA. Currently, she edits the literary journal Crab Creek Review.

As A New Mother, I Read About the Reincarnation of Lakshmi

Most people are mistaken that they are separate beings although they are one, Lakshmi.

-from the legend of a goddess

Life swam in a sea of afterbirth,
the parasitic twin on the back of a swan.

This was how she was born-deformed,
but a goddess in the eyes of her town.

When a jeep collided with a peacock,
I wondered if she believed in misfortune,

became the child who found
the witches' butter instead of treasure.

There were two elephants, a lotus bud,
gold coins flowing from her hands.

In a different country, I became a swan
with sinking feathers who watched

the churning of ocean. She was the hope
I carried. Sometimes life exists

in artifacts-the newspaper left
on the kitchen counter, the ghosts

beneath the hospital bed. Who am I
if not the paint-peeled boat searching

for a miracle? I move through an ocean
of milk, an island of wet feathers,

trying to understand how we add
to this world then subtract misunderstanding,

how we cut off the limbs of a goddess
so she can live a better life.

‹ Four poems by Keith Ekiss up "Smoke" by Richard Bronson ›