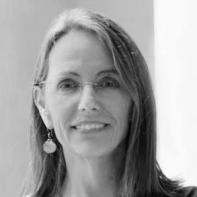 Deborah Bogen has four prize-winning collections of poetry. The latest, In Case of Sudden Free Fall, came out from Jacar Press in 2017. These days she’s primarily a political activist in Pittsburgh PA where she writes songs, plays ukulele and sings in The Highland Park Mini-band.

She needs a man, one who can drive an Old Buick right out of the State, away from old pipes and the stench of sulfur, away from crickets swaggering across the linoleum and the fog of fish frying every night. She conjures perfume from the ink coming off movie magazines, learns to smile through the sting of Old Sunnybrook going down, then wanders into the pool hall, glowing under low hanging lights, the room flush with railroad men drinking. She knows she needs one, a young one hot for the interstate, fat wheel of winnings stuffed in his jeans and sure as lightning rods bring down fire, one will come to her. Sure as God's in His Cadillac Heaven a boy will rise to her occasion. She's restless. Seventeen. She knows her fate's a Buick that will take her to Montana or Wyoming. And what's love if not a road map, county line, new town kind of thing? It's 1945. She falls in love with gasoline.

This wanting to unravel, to travel lonely at the edge of the road

yoked to an undiscovered purpose, wintry

and so far gone

this me, this mist, this ashy unraveling chained

to the axe in my crown.

Once I birthed a gold-haired child,

now I crave a beggar's bed,

for the fox is out and bells are tolling priests or fire.

Their knuckles a nick in my skull.

On July 4th, 1926, my father was born to a woman with red hair and a consumptive husband. A blackbird was clipped to the barbed wire fence outside that woman's window. It flew skyward exposing the red spot under its wing. The question continues. My mind circles it wary as a bull in a pen.

What was left behind? The consumptive was my dad's first ghost,
an inheritance, a grey difficulty, a disordered vision of his father and a bull in a pen engaged in what my dad thought was a dance.

Here's what I know about my dad: he was a pretty boy buttoned
into overalls in 1932. Elementary school and Sunday school and all that teaching about Jesus. He went to war, was coal to the masters, fuel to keep the big trains running. First there was a whistle, then an exercise. There was a specific way to kill a man, which they taught him.

Poem For My Reader: A Long-dead Sister

Better than sink-work—the poet's desk, the occult
descent into voice,

walking out against the wall of the work.
Keyhole listening.

In Pittsburgh, the dark is never really dark which is the way
I am alone these days,

drifting through our unemployed streets,

nothing mine except the whistle of the same train leaving
boxcars empty,

lights of SUVs and townships showing through the slats
and the trains so good at math, at zeros
and negative numbers, roaring past each other.

We used to whisper in the big bed, wondering
what the grownups were really up to.

Here's what I know so far. God's long division.