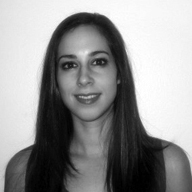 Stefanie Silva is originally from the San Francisco Bay Area. She received her B.A. in English at Santa Clara University, where she served as Poetry Editor for the Santa Clara Review. After graduating, she moved to London before moving back to California to work at Stanford University. She is currently in her second year as an MFA candidate in poetry at University of North Carolina Greensboro, and is a Poetry Editor for the Greensboro Review. She currently has a book review on storySouth.com This is her first publication in poetry.

The House of Cards

The boy builds the second story of a house
of cards, his hands steady.
The couple living in the house peck
each others' cheeks and take measured steps
on the red and blue patterned floors
while they chop vegetables to place
in the slow cooker. They whisper
about how they can hear everything
through the numbered walls,
and isn't the King of Hearts an awful
focal point for a living room?

Everything in the garden grows
on its tiptoes: the ivy does not wrap
around the house for fear of its own strength,
and a graceful praying mantis climbs
the thin spines of a cactus newly planted.

A light breeze makes the walls
throb and the Joker looks like he's laughing
at the couple, his stomach pulling in
and out as he gasps for air.
They run to their garden and jump
and yell and raise their arms.
They imagine hawks flying
over and gripping them in their beaks,
taking them up until they are floating
like two hot air balloons,
landing only when they find something
sturdier—-a bricked house
of Legos with windows
and a little yellow door.

The house sways with the boy's breath
but does not collapse as he begins
construction of the third story.
The couple lies in the bed
of flowers and scowls, but the boy
takes no notice, so they return
to their house, finish
their preparations for dinner.

It is customary to attend a viewing
of the body, to gather together like clams
and peer in, one after the other,
and say death looks good.

Once, my father and I found
my grandmother in her hospital bed, naked.
To me, her shriveled arms and legs and spine lengthened
like summer days, and then I saw her young,
weaving hats with supple fingers, stirring
a pot of fish stew, standing over
my father as a boy, her purple lips pursed
as she chided him for hitting his brother
on the head with a hammer.

And then, my father scurrying
to cover her up. And then, she wore
a blue dress to her funeral, and we all
paused to say she looked good.
My grandmother was stiff

as the starfish my friend gave me as a gift
for my tenth birthday—-
pink and spiny, microscopic eyes at the end
of each arm, two stomachs, one
to swallow prey, the other to digest,
and its hidden ability to regenerate a lost arm.

I tried feeding it mussels but it shut
its stomach, I tried stroking its brittle skin
but it pushed my hand away. It couldn't get back
in time to the coral reefs where it belonged,
so it said, bury me,
just bury me. And I did.

In his basement, the old man turns
on his ham radio, signals

friends in Morse code,
but there is no answer.

He thumbs through piles of old appliance manuals,
tacks a bent photo of his cat on the wall.

Later, he makes himself a martini
in the kitchen, heats a frozen dinner.

In the evening, the old man sits outside.
His backyard is infested

with ladybugs. They cover tree trunks
and flowers, animating plants with their whirligig

movements. Everything is hushed
to red. The ladybugs climb up his legs,

circle his torso like a sweater.
Their black legs prickle his arms, and he shivers.

Ladybugs settle on his body, their spots still.
When he stands,

weathered and ringed,
his knee joints lock into place,

and the ladybugs feed on aphids
crowding the surface of his leaves.

They need him. He raises his branches.
His toes root in the ground.