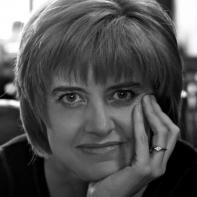 Jo Scott-Coe’s first book is Teacher at Point Blank (Aunt Lute 2010). Her essays have appeared in Salon, The Los Angeles Times, River Teeth, Fourth Genre, Ruminate, The Nervous Breakdown, and Ninth Letter. In 2009 and 2010, her work received notable listings in Best American Essays. Scott-Coe is an associate professor of English at Riverside City College in Southern California, where she also teaches public writing workshops for the Inlandia Institute. Her forthcoming book, The Holy Sacrifice of the Mass, seeks to understand the relationship between the 1966 UT Austin sniper and a friend who was a Catholic priest.

Happy families are all alike;
every unhappy family is unhappy in its own way.
—Leo Tolstoy, from Anna Karenina

He found himself divorced. In a tracksuit with open plastic zippers at the hems. He found himself at the big-hipped black piano in a house where he rented a detached apartment near the pool. Allegedly, he didn't give his wife the phone number or address, which somehow turned into not giving his two daughters the phone number or address, though somehow the wife and eventually the daughters discovered his location. The house had two acres of lawn scrolling down a hill with white fencing stitched along the edges. The steep street twisted to an end near a freeway onramp that caused midday congestion. From a wallsize window near the piano, he could see the distant traffic pile up. He could bang out Gershwin's Prelude Number 1 in B-Flat. He could make his own soundtrack.

Elsewhere, his wife was saying he said to her, Your lawyer's a toad. The plausibility of such a statement from him was acknowledged by the daughters, who found themselves on a courtroom pew next to their mother, the lawyer wearing a brown skirt, and also an uncle who placed himself in the scene for moral support. The well-tread courtroom carpet had snagged threads and static electricity, and thus seemed less official than domestic. This was not a scene of screaming and yanked children's arms or custody arguments in manila folders and stacked county forms. The daughters were old enough to drive borrowed cars, one daughter had a teaching job at a public school, the two daughters were supposed to be sophisticated now, undisturbed by their father across the aisle, appearing to make himself a foreign object.

Not long before, the father had found himself selling real estate (or saying he sold real estate) and driving a white Town Car with square edges. Then came the Successful Home-Buying Seminars and signing off loan approval papers for other people. He carried the big block telephone with a thick rubber antenna. He said he had a friend with a gun. He would come home just as, or after, the family sat for dinner at the oak table with placemats made from woven palm fronds that were hard to wipe clean. His wife scooped him a blue plate of chicken and rice, but he asked, Where's the three-bean salad? He spent fifteen-was it twenty?-thousand dollars on a real estate education franchise. The money was from an inheritance he had received. Don't tell your mother, he told one daughter. Then: Would you sign here, your mother's name on the tax return? He said people did this all the time.

Long after the real estate education franchise dissolved, he found himself keyboarding online articles about real estate. Supposedly he could make money this way. In one article, he interviewed a real estate agent and wrote that she was a good mother-he could tell she loved her kids. He mentioned his two daughters in the article: one graduating from U.S.C. and the other graduating from Loyola Marymount. This was how he described them after twenty years without phone calls. In other articles he wrote about how to flour hamburger patties before frying them in a skillet or on a grill, and how he cringed when one client called him a guru (though he now described himself as a guru), and also how housewives could make a living writing press releases (about tooth decay, or childcare, or crock pots) all from the comfort of kitchen counters or breakfast nooks. He offered a webinar on Search Engine Optimization. He put a cartoon picture of a fedora on his blog in place of a personal photograph. One daughter, then the other, discovered these materials online. Within a few days of being discovered, the blog and its fedora disappeared.

On a parallel plane, the daughters were positioning themselves in a vinyl booth at IHOP. One of them thought, At least we're not dead. They sat across from a mother who would not look at them, who seemed to be folding and unfolding something soft in her lap. (She had just spent, or would soon spend, a night on the back lawn with a fire in the metal trashcan, and unidentified photographs.) No one was ordering pancakes. The mother did not cry. She said the girls' father had his priorities backwards: he wanted happiness, but God wanted goodness.

The equation was confusing somehow. The daughters remembered long ago breakfast tables where their father gave speeches on kneeling in church, and secular humanism, and the proper placement of the fork between the teeth. Their father had preferred kielbasa to bacon, his coffee black. Did he read the newspaper at the table, opening it in front of his face like a temporary screen? Had he smoked at the table, when he still smoked-when their mother smoked, too? Already, scenes were evaporating.

His first night after leaving the home (He slammed the door, reported the younger daughter) he visited the elder daughter at her small bungalow and proclaimed he wasn't buying new furniture yet, new furniture would look too permanent. This statement seemed to hold out the promise of reconciliation, which is the same as a suspended ending. His wife-Your mother, he said-just needed to speak up, she should also get a life. Then he told the daughter: Put it this way: your mom and I had to get married.

He dropped the statement like a heavy envelope and drove off to an unknown destination-perhaps to the house with the white fence and the detached apartment, the place as yet unknown to the wife and daughters, at the top of the hill that had always been there, somehow ignorable, above the traffic.

Had to get married. For weeks, the daughter pictured a lost older sibling with a blurred-out face. (Not until later-on a car ride, one aunt pressing elbows between the seat shoulders-did she imagine alternatives. The aunt said, In high school your father really pressured my sister, for sex.)

Had to get married. The mother said she had no clue what the father meant by such a thing. Maybe this cluelessness was true. The mother flicked her eyes to closet doors, which happened to be not quite closed. One daughter, bending arms around a pillow, found herself craving something hard to believe.