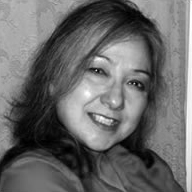 Kathleen Hellen is a poet and the author of The Girl Who Loved Mothra (Finishing Line Press, 2010). Her work has appeared in Barrow Street; Cimarron Review; the Cortland Review; The Evansville Review; Harpur Palate; the Hollins Critic; James Dickey Review; Nimrod; Prairie Schooner; RHINO; The Seattle Review; Southern Poetry Review; Stand; Subtropics; Witness; among others; and on WYPR's “The Signal.” She is senior editor for The Baltimore Review.

Rib to the rib of the rail they slap
a dollar on the bar, clap
if she'll strip
sink quarters in the Wurlitzer.

The unexpected physics of a kiss
that breaks the run from high to
eight-ball slow and
steady in the pocket
and they're pissed.

One cracks that black
mascara must be tattooed on her lids.
Another that her hair shoots out like
snakes from roiling cauldrons.

Drafts gone flat, they pull out dicks.
The handsome one in metal grabs a tit.
A stick. Dark birds circle.
Night hawks to the lager tapped.

Snakes twist
in the cave of her wit.
She extracts from her hip
the X-Acto
that she sticks

in the shoulder of the handsome one in metal
as he sinks,

she sticks deeper
as he bleeds, drafts go flat
as the spangles on her dress

as she wipes him on her sleeve
like peanut butter

i.
Light leans in. I watch you leave. A black man traveled over, melting into slush that melts
to nothing much. First man who'd been to prison, back, I'd ever asked to bed. First dazzling.
A novelty, you said, chopping slabs out of the ice. The snow dismissing color.

ii.
The white boys you remembered shouted nigger as you fled. Your lead leg over meters
as if practicing for track. You said you lost your cap, as you ran, turned the corner.

iii.
Chocolates (dark as you) as the amenities. To fit the people we might be, they'd hung robes as white as sheets on the adjoining door. The same civilities as in the store in Fredericksburg we toured. Battle maps. Confederate flags as flanked reminders of another, darker war. Darker yet, not
anecdote: A fact: A woman with a mop, struck to see us kissing on the stairs
going up. Witness to the sheets.

iv.
In this place too old for beginnings: “House For Sale.” The same ochre-tint on stately sandstone chiseled as the wall of Trenton's prison. You stepped away to get perspective on the newly painted
shutters. Hinted we see others. Said you never plan the way a free man plans. Instead we talked about the weather as we walked uphill in drizzle to the Jefferson Hotel.

v.
Half a cigarette to get you to the exit. Ahead, more snow. I know no name for it in Greek, though- it is the closest I have come, the closest I have been: Sex as liberation. Dance as feeling.
You taught me: Swerve to stop. Look behind where I am heading. Sing.

Summer meant us to be kind so we fed it red-
skinned peanuts as if it were a squirrel. Then someone
said, “They don't eat peanuts.” We didn't know. It seemed
to us a stone in the middle of a pond they'd
drained and painted blue to confuse it. The boys
from St. Luke's cut with far-flung sticks their initials
in its shell. The sticks piled up, the leaves. A mountain's
weight of season on its back before the season
put its boot inside the door at Ray's Sports Tavern
We didn't see it anymore until Donora's
championship. A trophy nailed to Ray's hinged door:
A bowl unhinged of its exquisite soup.

Such felonies for moving vans-
Were they mine?
A cut so vast they had to graph the battered
nerve with tougher skin
Cover the stunt to abort it

If I were true I'd say I never loved you
Like Lennox we never used. Glasses for two
wrapped as if they could be roses
in yesterday's yellow news

We remained in the self's terroir
Like must, decanted
in what seemed to be transparency
but

like the kiss on a tissue
the full in the mouth, the feel
discarded. The uterus: dumb