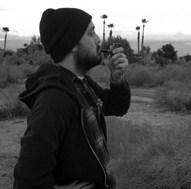 Born in northern Illinois, Daniel Elson has made props and animatronics for spook houses and theme parks, co-starred on a reality television series about torture for the History Channel, and sold the rights to his likeness to Cartoon Network. Former clients include Disney, Playboy, The Tonight Show, Rockstar Energy Drink, and "Screech" from Saved by the Bell. He now exhibits "fine art" internationally and works for his alma mater, Columbus College of Art and Design. His paintings and sculptures can be found in the private collections of people like Kevin Smith, Pete Wentz, and Ashlee Simpson.