"Everyone Was There," by Anthony Varallo 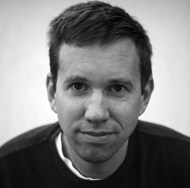 Anthony Varallo's short story collection, Out Loud, won the 2008 Drue Heinz Literature Prize (University of Pittsburgh Press). His first collection, This Day in History, won the 2005 John Simmons Short Fiction Award (University of Iowa Press). Varallo is the recipient of an NEA Fellowship in Literature, and his stories have appeared in Gettysburg Review, New England Review, Epoch, Shenandoah, Harvard Review, and elsewhere. He received his M.F.A. from the University of Iowa/Iowa Writers Workshop, and his PhD from the University of Missouri-Columbia. Currently he is assistant professor of English at the College of Charleston, where he is the fiction editor for Crazyhorse.

Everyone. Even the new barber, whose name no one could remember. He drank three margaritas and praised Louise Fenton's lousy spinach dip. The kid who rides his mini-bike on the sidewalk was there, too. He played video games with the Hines' children and even let them try on those fingerless gloves he's always wearing. No one said anything about him riding on the sidewalk. It didn't seem right to say anything about him riding on the sidewalk, especially with everyone being there, like Father Hearn and Mrs. Brofski and the Alexanders, including Rita, finally back from Singapore and chatting happily with Julianna Meer, who was also there and whom no one could recall acting so cheerful, especially since the incident with Norman Brigantine, who was there, too, and who seemed to be avoiding Julianna, departing a good hour before anyone else and leaving his Pittsburgh Steelers bottle opener on the credenza.

Gordon McLain pocketed the opener and later gave it to Mary Hedges, who was also there, although not with Rick, but Peter Bennett, who took the opener from Mary and was glad to assist Muriel Masters with a tricky cider bottle when everyone was wondering what the woman who never leaves the post office was doing there, clearly having left the post office and clearly having done something dramatic to her hair, which spilled loosely from a white bow.

Several teenagers were there; too, the ones whom everyone suspected of spray-painting BLOW ME! on the Hogarth's driveway (also there) although they seemed polite enough, laughing at Colin Kiefer's off-color jokes and retrieving paper towels for the ghost of Billy Zimmer when he spilled Tangeray on the sectional.

The girls-who-seem-to-be-in-Girl-Scouts-but-aren't-really were also there, huddled by the stairway, still wearing their phony sashes and stolen caps, making small talk with the UPS driver, Reggie, who was also there, along with Reggie's assistant, Jerome, who wore cracked Ray-Bans and never spoke a word. Chris Fitzsimmons was also there, as were Sheila Brown, Stephanie D'Amato, Greg Mackowski, and the girl who drives a golf cart around the cul-de-sac, Chloe. Around midnight an entire swim team showed up and joked noisily in the front foyer. Dr. Timins was also there. He drank nothing and eyed the swim team with clear disapproval. He didn't so much as nod to Colonel Wallace, who was also there, although without his parrot, Rutherford B. Hayes.

The event was so unprecedented, so spectacular, so full of fellowship, love, and community, that everyone went home feeling quite certain that, although they could not say what the occasion was, or who was hosting, or what street it was on, or whose home, or why any of them had gathered at all, everyone was there, everyone in the world.

‹ Fiction up "The Island of Meats and Cheeses," by Devin Walsh ›