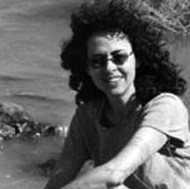 Marcia Golub has published two novels and a book on writing (Secret Correspondence, Wishbone; I'd Rather Be Writing), as well as poems and stories that have appeared in Narrative Design (anthology), Contemporary Rhyme, Blueline, Ars Medica, and Caution Horse. Her unpublished novel TALE OF THE FORGOTTEN WOMAN was nominated twice for a Pushcart Press/Editor's Award as well as a PEN/Nelson Algren Award. She teaches at Writer's Voice.

Cormorants flew by in a giant flock
while I looked out the window, saying kaddish for you.
They spelled out massive letters against the sky
in a language I could not read,
an ever-changing script, a cuneiform of working wings,
in a pattern controlled by all and none
as leader became led became leader anew,
and the shape of the flock spread out
and curved close, then far,
as away they flew from pane to pane,
across the sky and down the river, and out of view, gone
beyond my vision, while I thought of you.