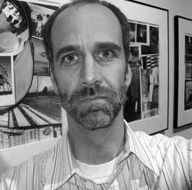 Scott Bade lives in Kalamazoo, MI with his wife Lori and sons, August and Stuart. In addition to working as a fulltime technical writer, Scott Bade is pursuing a doctoral degree at Western Michigan University. He is a former poetry editor for Third Coast and is currently an editorial assistant at New Issue Press. In 2010, he received a Gwen Frostic Creative Writing scholarship at WMU. His poems have appeared in Fugue, Poetry International, H_NGM_N, Night Train, and others.

But always rocking between chapters, but always his notes on the seed packet.
But always stalls at the field breaks—
The heavy heart: funny how we drag it through work, sleep marooned in its swales,
but when wrestling the children it becomes a fat red balloon.

A sheaf of cold air where the blanket once was. And after the turning away.
At some point the building must have commenced its own deconstruction. Enough of this
one shingle at a time business. Small debt owed the carpenter bees.
So too, the woodpeckers.

Not the walk for 2.6 miles in cold rain to improve hot chocolate. Not the leaf cups were
full of snow this morning and not he giggled as she fingered the spoonfuls of sugar left
everywhere. What load do the students see him carrying in the folds under his eyes, in all
of the jokes that he tries?

Sweater's slight tear: is it air wanting in, wanting out of weave's hold?
Did she hum or cough while floating past in her flared capris?
She says she's trying to learn how to again.
Weather's rare lies. It's not killing the petunias, not fading the paint.

Complicate your life to such an extent that one word may describe it:
crazy, fucked, dreamy, dwindle. In this manner one may undertake large projects from a
position of humility and simplicity. What's exposed when the teeth are removed? A
tongue that still bites. Somehow he acquires the rights to whining, then through sheer will

drives the market value to the moon, splits the stock, sells to his brother and just like that
we're asking him where we left the remote, did you see the yellow envelope from the
insurance company? Not the way her breasts swung forward when she hopped by
but the crutches small, pressured squeals.

We're fortifying the child's bronchial tubes so we sit
on the floor, tangled in plastic tubing and tools, tools,
we need pretend pliers and a plastic saw and later we hug
pillows, because it feels good, really, and I think of football
and I know somehow these moments are truly the 64ths
on that fancy calibrated engineer's ruler called parenthood
but I don't know where to begin or why I should need
such an elaborate rule. Just this morning we tried symphony
then ate the play, it felt that way, sock in mouth, racing to the sofa
and the cynic in me says let the boy lose; let him feel the pain
as he watches the victor (me) curl under the flag but then the realist
says, sure you can do that but what about this fellow over here,
draped in the glory of human accomplishment, this one with arms
as big as thighs (infant thighs)? When we stood in line
for ice cream, our discussion turned to neon baths of signs,
until the sugar kicked in, and we raced again to a formidable
conclusion, something majestic like a gnarly old oak;
the native Americans in this area used them as markers,
as alters and totems, gods who live among us, barking directions
and demanding attention. And they didn't require much
in the way of donations, just a little reverence here and there,
pick up after you're done, pack in / pack out, a little water,
some sun, maybe some cicadas to expedite the pruning.

We painted broad ideas in small dots of pure color
and whammo, there it was, a weekend in the park,
some great mud, and oh the joy in messes, germination,
these patchwork skies full with nothing but the stiff brushes
and coarse adjectives, and I'm sorry, the kid's language exploded
again, this time it's paint, circular trails of more or less
recognizable shapes, lesson wanting, no needing, no public,
because today thoughts are ice cubes clanking a juice cup,
and we're taming a bronco or, better, befriending him
so that his fierce eye and powerful wave of neck might cut
the mist in the dream I had last night of pursuing a stranger's
couplets, they could have been Yeats', they could have been
song lyrics, but alas they were orbits, circles, arc of the reins
from that still bucking beast, and my child that I still hold inside,
and the other one that's here, painting outside, together they see
shapes in the mud, then hunger, and they run, even with nothing to
hold on to, no rope to remind me the jump-rope of marriage
appears to be fraying, no non-use, which is a kind of dying,
all of the color sucked back to the core, a locus, and I tried
to tell my son: have each shape support the claim of each
brushstroke, like instead of black she chose rainbow;
try to catch my fantasy before she hangs it all
on the wall, calls it "Emphasis," then storms off
to buy thong underwear; you have to understand,
I told him, Seurat wanted to correct impressionism,
not doom it to the brooms, and my boy responded: first
he was a tree in autumn, then he was a deadhead, then twig,
then theater and audience in front of the refrigerator,
in front of the scattershot letters, all of these magnets
and just one kind of attraction, or maybe
it's all of this energy and just one chance to use it
well. Each of us trying to keep up the keeping up, and
I remember how Mama coaxed him into the bathtub, asked
for an explanation of string theory, before the water chilled,
but wait, that was me she'd lured into the tub and what she'd said
was "This thing is scary," as she spider-walked her fingers across
her ballooning belly, "Explain to me why we're doing this again,"
she said over razor and bubbles. Because water always finds its own
level, because we regress to the mean, which is what the Cubs
were doing at that moment, and I can say that now
in our more or less calmed universe of children,
6 years removed from that tub, even if fear
hasn't really changed its preference to toy with
the future and its comfortable bath of memory,
and even if the other thing I told the boy came from a game of
sorts and it was this: enter as many lighted fields as you possibly can,
if only to feel the storied heat of their travels, the bits, the light
they picked up, how everything was defined in an instant and then
blown away the next. It's such quick aggression, this dance
with light and pigment, I mean, the movement, no
the making, of past from present, and all of this forthrightness.

The old hardware store's front window had western exposure and a view
of the faces of almost everyone passing through the evening lava light
that poured over the suburb's busy rush to home. It might have been
autumn, and slow as the hour between 5 and 6 was, I didn't imagine
the urgency those passersby felt inside was the same I'd known
for the past two hours, a pull that originated in a book-ended world
whose only remuneration seemed to be a proximity to the good looks
of youth. I remember my name—stitched red smock, the tape measure
and screwdriver I carried in pocket. And I remember the broken
window a classmate held in front of her then placed on the counter
between us. "Fix it," she'd said her father told her after she admitted
to playing a part in the breakage. Beneath the ceiling fans, I was mired
behind acne, I was a kid at work discussing window repair options-
glass, plexi—with beauty as I understood it. How distant Mr. Izzo's history
was right then, how vague the conjugates of be. I was aware of two
worlds within which I existed then, and both appeared
to operate on currency as transparent as tar, as liquid as sand.
I asked how could he…why was he…? "I don't know," she replied
while daring an edge of a shard with her finger. "Can it be done
by tomorrow?" Of course, of course, and I recall the quiet
the transaction wanted to wrap us in. This was not high school.
We were elsewhere and we knew it. This was the other
real world. For a moment within that space, there was awareness,
a brief and logical (at least at the time it seemed so) placement
of things and us amongst those things: the sashes, the lightning
bolt cracks in the pane, crumbling putty, chips of paint
and each of us, on either side of the window, our hands holding
the frame, and we picked the shattered pieces, bare-handed,
and placed the jagged shapes in a pile on the counter. And now
that I've had 25 years to think about it, was it commerce's
playing field that afforded me the confidence (there it is, is that it?),
to take that window frame from the counter, set it on the floor
and just talk to her about her father? A commercial relationship,
a brief congress of past and future, and it was all held in
a moment above window putty, above the already ancient
oak countertop, above the long wooden floor boards that
held within their grooves all matter of each moment,
each deal, no matter how much sweeping compound,
no matter how many generations of boy swept and spent
the afternoons re-stocking weather—stripping while dreaming
the chasm of a body. I can still feel it, the drafty store's pockets
of heat and chill; they are familiar, locatable, small invisible
vestibules wherein I can glimpse the deep cerulean portholes
that hide near the boxed brooms' heads, where I can watch the day's
voice carry the bleach of sunlight to the construction paper displays
of caulking products, where I have a view on the spectacular
and dull, and where the next day seems a moment long
as the universe's memory: as I hand the receipt and change
to her, a fingertip touch of her open palm. That long.