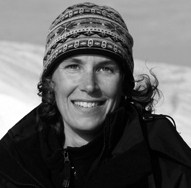 Elizabeth Bradfield is the author of Approaching Ice (Persea, 2010), which was a finalist for the James Laughlin Award from the Academy of American Poets, and Interpretive Work (Arktoi, 2008), which won the 2009 Audre Lorde Prize and was a finalist for a Lambda Literary Award. Her poems have appeared in The Atlantic Monthly, Poetry, The Believer, Orion as well as many anthologies, and she is a former Wallace Stegner Fellow. Founder and editor of the grassroots-distributed and guerilla-art-inspired Broadsided Press (broadsidedpress.org), she works as a naturalist and lives on Cape Cod.

How in love with myself I was
on the iced-over river, Alaska Range
sprawled miles around, skeered trails
of snowmachines across the low hills,
spruce and spruce and a few hours
of thin blue sky: the day.

Laced into three-pins, sweating
in the perfect ten above, skijor
harness snug on my hips, at last
I was in this February
air silent of most birds, not
in Anchorage's Tacoma-ness, its
five-lanes and conveniences, but on skis, in the mountains, an old dog
pulling me toward a cabin of logs,
its weather door a thorning of nails,
point out, to deter bears. Do you know this moment? When
you expand at last from the clench
of the daily, find yourself bodily glad,ss
at last discovering pride (or whatever word
we don't have for such pure chest-bursting) not
something to be stuffed into a pocket,
but vast and permissible.

I Am Lowing
-for Arctic Explorer Donald B. MacMillan

Chewing cud or
pissing into crabgrass, cows
orient their bodies toward the poles.

You're not surprised, Mac. You know what it is
to feel your iron self
pulled.

Deer, too, and other grazers
observed in fields shot by satellites
trend north/south.

I'm living in a city and it's loud.
The pole star is faint
through civic aurora.

When power lines cross herds,
animals redirect themselves
to that hummed path.

They don't mean to. Since moving here,
I've flown east/west a dozen times,
back north only once. Mac,

birds, whales, and bees align. I know
I yearn along a worn rut
in the earth's field. As you did.

I don't mind being unoriginal
in this way.

The day's been chopped in half, so why not this, too? Yellow
yolk surrounded by meat that looks like ice. In this, we eat

the absent day, eat the frozen season, mouth giving warmth
and, yes, tenderness to flesh that will never be mothered. Back home,

the Cape's long curl nestles eiders in the harbors. They mutter together
and dive, rise and ruffle, the sound on still days carrying into homes

where my mother would bend under the lamp glow and wash what others
gave her. A boy, I didn't know where the ducks went after winter. Just away.

In spring, what treasure to find eggs snug in breast-down laid for them on tundra. I filled
my dory to the gunwales, couldn't move for eggs, rowing like a woman stiff

in her joints, ginger with her bones. And now, November, my hatchet
through the hard, specked elliptical, my appetite for this land

that ate my father and so, cold seasons later, my mother.