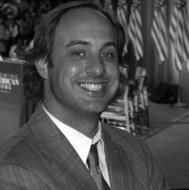 Brad Johnson is an associate professor at Palm Beach State College, FL, and has two chapbooks Void Where Prohibited and The Happiness Theory available at puddinghouse.com. Work of his has recently been accepted by Flyway, The Madison Review, The Modern Review, The New York Quarterly, Steam Ticket and Willow Springs, among others. Poems of his have been nominated for Best of the Net and for a Pushcart Prize. He currently serves as Poetry Editor of Magnolia: A Florida Journal of Literary and Fine Arts (www.magnoliafloridajournal.com).

Zeno's dichotomy paradox states that distance can only be halfed
and arrival never actually realized.
Our approach is fractional
halved, quartered, eighthed, sixteenthed, thirty-seconded, sixty-fourthed.
We approach an approach by approaching an approach
we can never reach.

It's night and her shoulder curves
like the upper bout of a violin.
Her hip rounds like a cello's zarge.
Her spine, facing me, is a xylophone.
Each vertebrae is another bar
producing a different pitch if struck by my mallet-thumbs
but my mallets have lost their bulbs,
are only sticks.

I am lost in want,
wanting to touch her but am unable.
Even with my hand on her back,
my fingers raising soft hairs,
we are separated by an infinity of fractions
made up of Everests and K2s impossible to surmount naked,
revolutions impossible to suppress
armed only with an erection.

This space between my finger-skin
and her back is a Vatican City
with its own post office
and police in uniforms designed by Michelangelo.
But the ceilings are empty. The fountains dry.
The embassy closed. Ambassadors retired
to warmer climates. In the television light
the space between us hums like a cargo train in the Michigan night.

The second hand of the bedside clock
clicks like a cop clapping his club in his palm
and this bed swells like a spray can
whose label curls black after it's tossed in a trash can fire
while the time between us
stands like a shoeless adolescent in the snow.

The time between us is a fish without gills, an infant in a swing
and the space between contains I-95 from Miami
to Maine, 400 miles of Pennsylvania Turnpike,
the complete Karma Sutra except positions 22 through 26.

There are no air balloons over the vineyards
in the space between us,
no trolleys trolling toward the harbor and the GNP has gone down
faster than a virgin
who thinks her boyfriend is leaving her.

The space between us is a twentieth century pugilist.

The space is Akron, Toledo and Ypsilanti
where sedition is a liberal pastime
like snorkeling, cycling and Frisbee golf.

Spies were sent in a desperate clandestine attempt
but did not return. The cause is lost.
The toilet seat left up. No more visas to be issued.
No Jedi mind trick can make her turn.

The fan lifts solitary strands of her hair
making them swim in the air
like lines of kelp in the ocean.

Her words: Honey, it's late; I didn't shave today;
I've got work early in the morning
leave me with the feeling of being ticketed
for littering by the state
who authorizes highways and parking lots, city centers and boardwalks,
satellite debris and Wal-Mart.

Intimacy is a minor league knuckle baller
who strikes out eight before surrendering
the game-winning home run,
is the small pocket inside the front pocket
in a pair of blue jeans.

Passion is a dog at the gate.
Commitment is a documentary
narrated by Morgan Freeman.
The cop claps his club in his palm.
The spray can in the trash can readies to explode.

The motorcycle cop dismounts
in the intersection and the funeral procession speeds
through with their windows shaded,
their headlights steady as stairs.

Is it for the mourning that the traffic laws
are lifted for those traveling from church to cemetery,
from temple to tomb or is it for those of us stuck
at the lights confronted by Death in a black Cadillac
whose thoughts, in the delay, travel
to our uncles who left four kids behind,
our grandfathers sinking in loveseats in front
of the TV, our grandmothers in rehab after
their second stroke, our father's slow decline into MS,
the mother of our daughter's friend whose found
tumors in her brain a week after learning
she was pregnant with twins,
the husband of our co-workers whose plane went
down in the everglades, our buddies with Hep-C,
our buddies with irregular heartbeats?

I'm sure the Christian at the gates won't open them for me
but there's a mail slot I hope to slip my fingers through.

All this is forgotten like a morning rain on a hot afternoon
when the cop mounts his bike and we wait,
our backseats stuffed with lies and apologies,
for the light to change and let us go.

I point out Orion's belt
but you've still got your gas station sunglasses on.
You're like a dead star whose light reaches us millennia after its
final fizzle.
It's summer and Orion's a winter constellation anyway.

You've still got your gas station sunglasses on
and haven't said a word since I picked you up.
It's summer. I know Orion's a winter constellation
but I look for it whenever the night is clear.

You haven't said a word since I picked you up.
On the porch, a candle flame leaps from its wick in the wind.
I looked for you whenever my nights were clear
and now you're here, lifting your leg, tugging your shorts from
your crotch.

A candle flame on the porch leaps from its wick in the wind
and a star shoots through the sky like the lit match you toss into
night
before lifting your leg to tug your shorts out of your crotch
while claiming "If something's worth doing once, it's worth doing
twice."

A star shoots through the sky like the lit match you tossed into
night.
We're both like dead stars whose light reaches earth millennia after they've
fizzled
but maybe you're right. If it's worth doing once, it might be worth
doing twice.
So I point out Orion's belt.