"The Fire" by Nin Andrews 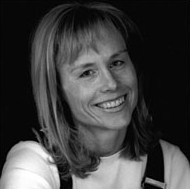 Nin Andrews' poems and stories have appeared in many literary journals and anthologies including Ploughshares, The Paris Review, Best American Poetry (1997, 2001, 2003), and Great American Prose Poems. She is the author of several books including Spontaneous Breasts, Any Kind of Excuse, The Book of Orgasms, The Book of Orgasms and Other Tales, Why They Grow Wings, Midlife Crisis with Dick and Jane, and Sleeping with Houdini. Her chapbook, Dear Professor, Do You Live in a Vacuum, was published by Subito Press in December of 2007. Her next book, Southern Comfort, is just out from CavanKerry Press.

A woman lights herself on fire again and again. Each time she thinks she can control the fire, or at least delay the progress of its flames. The little flames that singe the surface of her tiny blonde hairs and race up her arms and legs. When the heat rises, she takes a sip of ice water. Then a glass, a quart, a gallon. She breathes in to the count of ten and exhales slowly to the count of twenty. Next she counts to fifty. Then one hundred. She tries to blow out the flames one by one. Nights she runs into the streets like a human torch, crying out when she can not sleep. Days she visits therapists who prescribe pills. Pills and more pills. She collects them until she has hundreds, then thousands. Then she swallows them all. Oh yes, she takes them all at once. Nothing works. Her desperation fans the fire. Her desperation becomes the fire. Sometimes she even talks to the flames. Go away! Now!  The fire never listens. It can't. The fire keeps blazing inside her lips, guts, and groin. The fire knows what every fire knows. It must do only what she commands. It knows that Go away means, Come. Now! More!  It has no choice but to fry her again and again.