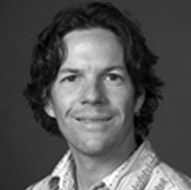 Sean Lovelace teaches creative writing at Ball State University. HOW SOME PEOPLE LIKE THEIR EGGS is his award-winning flash fiction collection by Rose Metal Press. His works have appeared in Crazyhorse, Diagram, Quick Fiction, Sonora Review, Willow Springs, and so on.

One early morning, as the walls of the room were just changing from pale to butter to butterfly wing, the old man arose, boiled water for coffee, and wondered if the fall had arrived. The fall was hunting season. That and flannel shirts which were the best shirts. He went into the living room for the shotgun. It rested on a gun rack made of two upturned deer hooves. When did I take that deer? Was it a buck or a doe? He couldn't remember but felt he should, since of all the deer he'd harvested—and there were plenty—this particular one had its front feet in his living room. He reached for the gun and it moved further away. He reached again, and it either rose up the wall, or he shrank while grasping—or both. He found he could actually control the gun's floating, up and down, with the lift and fall of his outstretched arm. He giggled at himself.

Then grew troubled, and so went to the kitchen for his coffee. When the man returned to the room the air was rich with WD-40, one of his favorite smells. He took a sip from his coffee mug, thought it bland (it was bland—he had neglected to add the instant coffee to the water), and looked longingly at the gun. How he would have loved to touch the checkered walnut of the stock. To run a cotton patch soaked in WD-40 down the barrels. The gun had two barrels, side by side, and the man thought maybe they looked like lips.

“You don't need me,” the gun said. It had the voice of a nurse the old man once met in a field hospital, but he kept those years buried in a quilt of gray leaves, and so tried to forget what he just remembered.

He leaned against the wall, gazed at his bony fingers, and asked, “Why can't I reach?”

The gun snorted. “I just answered. Things accelerate. They don't even use shotguns on deer anymore. They use rifles, which you refuse to even touch. They shoot ten, eleven times. They don't sight in their own guns—they pay a shop to do it. Drop it off in the morning, pick it up that afternoon. They'll even shoot a deer off a ridge, just by silhouette. You miss and the bullet travels three and a half miles.”

“Three and a half miles,” the old man muttered. He'd worked artillery in France. One minute he'd be cradling a shell like his father bringing in cordwood for the iron stove; next minute was a distant crump and a billow of dust, or sometimes flames.

“You wonder where it all landed,” the gun said, but the old man already stood hunched over his bedroom window, squinting, searching for the pear tree they once planted to block out the sun.

“Why won't you sharpen?” he asked the knife. He'd spent all morning at the kitchen table running the blade over a wet leather strap.

“Because if I sharpen it will open,” said the knife.

“If it opens, all will be revealed.”

“Nonsense! Quit talking that way. I own you. I have dominion—it says in the bible!”

The knife laughed. “Nowhere in the bible does it say you have dominion over knives. No way. Besides what I will reveal are the organs of the deer, heart and lung and spleen, still warm, breathing off steam in the cold morning air. And then their simple beauty, the pinks and reds and glossy whites, the rounded glow, so pure and clean, since deer don't drink or smoke or eat all these crazy foods. And their size, oh my—the exact same as human organs. You'll realize that, old man, and well, it will be too much.”

“You don't tell me!” He flung the knife into the sink with a clatter. He slammed drawers; searched the cabinets for saltines. Never found them, or the catsup.

He was one of those men who refer to their wives as mother.

“Mother, are you there?” he'd say to the empty half of the bed. He'd reach out his hand but it would only be his pipe, the wooden bowl still warm. Or he'd say it in other ways: whisper to his coffee mug, or into a Mason jar of pickled okra. Wind the clock over the mantle when he didn't care for the sound of its ticking and chimes (or even what time it told).

One Friday he found a pair of her socks in the freezer, atop a sloping mound of frostbitten bass filets. He wore them around the house all day, and the next, and to the Presbyterian church on Sunday (his granddaughter picked him up in her Chevy Cavalier) and then out to the mailbox that evening. Afterwards he washed the socks clean of orange clay, hung them outside on the line, and the next morning one lay pink and curled on the wet ground like a kidney. The other was gone; and what happened to the burn barrel? Where would the garbage go, the slop jar? Where was the well?

He looked to his bare feet, at a meandering trail of deer tracks in the dewy grass. A hell of a thing, in his own backyard. What about the spinach, the snap beans? They must be crossing through at night. He heard footsteps out by the garden once or twice, this thudding…

He had four nightmares, though one was just straight up memory.

The first they made him mayor of a bombed-out town in Belgium. The worst part was no one could understand his words, including himself. He spoke Japanese the whole time, and he had never learned Japanese.

The second was a tour of all the dogs he'd accidentally killed in his lifetime.

The third he was hunting a stretch of bottomland owned by his youngest son, the fat one. His son gave him a Dr. Pepper and put him in the second best stand—corn field on the right, cedars on the left, white oaks down the center, a sky above blue as a cat's eye.

Four minutes later a deer crept by, a nice buck. The man lifted the double barrel to his shoulder, shot once, and sheared off the buck's left antler. The deer hung its head. Then shook it twice, and high-stepped towards the stand, weaving like a drunk. Eventually, it stood at the base of the ladder.

“Now you've done it,” the deer said to the man.

“Done what?” He looked down at the deer and thought about the second barrel, but something inside him stirred against it.

“Shot my antler off. My antler is connected to my brain plate. Can you imagine my headache right now?” The deer rubbed the antler stub with its hoof. “You know I have to

compete for does with this. Have to fight bucks, all season. I'm done for.”

A metallic growl shook the air, a backfire, crackling underbrush: a four wheeler. The old man raised his head, his eyes gazing off, his thoughts tangled in some dark thicket.

The deer eyed the ridgeline, a gathering blue gasoline haze. “Man, I already feel lonely,” it said, and vanished like the dew.

The fourth nightmare he lay shivering when they shook him awake, stuck a lantern in his face, and screamed, “Can you drive a tank?” And he said, “I'm a farmer, I can drive any damn thing.”

And then all that came after.

‹ "True Winter," by Michael Davis up "On the Promenade Deck" by Susan Messer ›