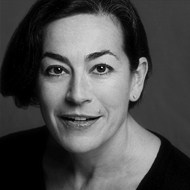 Dinah Lenney is the author of Bigger than Life: A Murder, a Memoir, excerpted in the New York Times, and the co-author of Acting for Young Actors. Her essays have or will soon appear in publications that include the Kenyon Review Online, Defunct, Water~Stone Review, Agni, Brevity, the Coachella Review, and the Los Angeles Times. She serves as core faculty in the Bennington Writing Seminars, the Rainer Writing Workshop, and the Master of Professional Writing program at the University of Southern California.

Built, so goes the story—so says Fred, my husband—in some remote corner of Vermont, with instructions to make it solid enough for a woman to dance on. And wait now—I'm trying to remember—can it be my father-in-law actually picked the tree? Am I making that up? Well, it adds something, doesn't it? A coffee table with a soul, an actual antecedent, born of a single pine. Could very well be, I can imagine it, I can: The General—I called him General as in General Mills, his idea (What shall I call you, Mr. Mills? "Call me General")—standing in the middle of a cruciferous forest: Not that one, not that one, no, no, no. Yes! There it is; Worthy of dancing girls. Back then, I admit, I was looking for trouble, itching for arguments; but what sort of sexist nonsense was this? Consider the implications; not as though it was built for a dancer, no—not to showcase her talents, or his, if it came to that. It was built—according to my father-in-law's specifications—for a woman to dance on. A woman dancing for whom, exactly? Why, for the General himself, all six foot four inches of him; fair, tousled, long-limbed. Picture him there in that chair, tie loosened, shoes off, legs crossed at the ankle on the bench that still slides out from under my eyesore of a coffee table. There he is, a ghost, half-tanked, a filterless cigarette between the fingers of one hand, his drink in the other. On the platform before him, a foot and half from the floor, a woman twirls the length of the table and back, then falls into his lap; Romantic, absolutely—very cinematic, very noir—but consider: it's not like he's going to take a turn.

I'm out of line. I know I am. It's a lovely story—family lore. "Where did you get this unusual coffee table?" "Why, we inherited it. It belonged to Fred's father. Tell the story, Freddy." Comes the far away look in my husband's eye; there's the boy staring up at his father, not unlike his father staring up that tree: "It was built for a woman to dance on, that's what my dad had in mind."

One asks, one has to, if it ever came to pass. And yes, this we know: one of his daughter's friends (how appropriate is that?), 1970-something, a sylph of a girl in a diaphanous dress, a dance major, got up and arched her back, stretched and waved her arms with her hair in her face, as if all alone in the room, as if she didn't care who was watching. Before that? Who knows. Since? Only me. Only I have danced on this table; I've turned up the Motown high and waltzed with my wooden spoon on more than one occasion; not with grace—no seduction going on—my moves are exuberant at best. (At worst? Well, ok, one time I got carried away, tripped off the end and nearly broke my head on the hearth.) And my son. We have a video of Jake, not dancing exactly, but athletically swaying from side to side in the middle of the table, almost as if waiting for a pitch—or the return down the line: wearing a diaper and nothing else, performing the hell out of a nursery rhyme. All the world's a stage, after all—or at least our coffee table serves when push comes to shove, and what else is it good for? What sort of coffee table is it? Seven feet long, straight along the outside edge, curved on the inside where it faces the couch; black with dirt in places—so satisfying to rub it with a rag soaked in lemon oil—although it never comes entirely clean. But it's not the wood I mind—I like its knots and stains and scars and scratches; I even like the water rings, left over from dinner parties, and abandoned sippy-cups. It's that curve—that pretension to natural—plus the size of the thing is wrong for the rest of the room, too long, too narrow, too hard to get around altogether. Woe to you, for example, who's after a dog who just peed in the middle of your Kilim; you, who wants to get that dog by the collar and stick his nose in his puddle and then heave him out the back door and slide it closed it in his face and show him who's boss: I defy you to get to that dog if he's made it to his favorite spot under that table. It's impossible, that's all.

I hated the table the moment I saw it. "It's a fact of your life," said my mother, who happens to be a designer, who sees all furniture as rich with metaphor, as informing of character or relationship or both. So this is my marital compromise then, my for-better-or-worse-in-sickness-and-in-health: Love him, love his coffee table.

I used to have this fantasy—not that we heaved it, or took it to Good Will, or chopped it up for firewood, no. In this daydream of mine, we had a second house. It was why I was saving worn linens, mismatched china, and an ugly old soup pot. Someday I figured the coffee table would move to our ocean-side retreat, where we'd also need extra pillowcases and something in which to steam mussels and corn on the cob. I'd replace it then, at Crate and Barrel or the Pottery Barn—or possibly Restoration Hardware—and hey, I was going for ready-made as opposed to custom, and nothing especially upscale. I only wanted one that wasn't as long as my sofa. Maybe a two-story number with room for books and magazines and Scrabble Deluxe on the lower tier.

Easy enough, to eventually give up on the idea of a house by the water—to give away chipped crockery and a stack of extra sheets and towels. But the General's table continued to assert itself; took on new and different proportions; would not be denied.

Jake was three when I took him to spend a day at a well-respected Montessori school in Hollywood. He perched on the corner of a miniature table to watch another child do a puzzle. "Jake," said the director of the school, who, oddly, wore cherry red lipstick and patent leather high heels. "Do we sit on the table at home?" Well, actually, yes, we do, I wanted to say, nodding instead, smiling in her general direction, taking his hand and leading him out of the building and back onto the street, where we got in our car and drove away. We sit on the table, we stand on the table, we dance on the table. Once a woman invited to a dinner for twelve, every counter occupied, offered to bring dessert and then had the gall to roll out her pie on that table. She wasn't invited back, I'll give you that.

While I speak of my father-in-law with a scowl in my voice, I am not without remorse where he is concerned. For though he abandoned his son—my husband—disparaged and neglected him straight through his teens and well into his twenties; in the end he followed us to California, by then stooped and frail, grieving not just his second wife, but his former self as well, I suspect. And was I kind to him under the circumstances? I was not. I was disrespectful and intolerant. I didn't like his old-fashioned brand of chivalry and I rubbed his nose in it. I wore a mini-skirt and tall boots and when he said something nice about my legs I rolled my eyes. As if I was better than that. As if a woman dresses that way and doesn't mean someone to notice. As if a woman dances for nobody. (Even when she does, even with a wooden spoon, even if she isn't much a dancer, who does she think she's kidding?) And then, a week after he'd found his own place, unpacked, and made himself a list of things to do—hotdogs, beer, Neosynephrine, writing group, wheat thins, golf course, Campari, pool hall for Fred (Fred found the list on the kitchen counter when he went to La Jolla to identify his father's body)—just two days before his 66th birthday, he collapsed to the floor, all alone in that strange place, his wire-framed glasses bent at an angle under his head when they found him the following day. And didn't I despise myself for judging him; for behaving as though I knew better and more, when I was the one who'd put on that skirt in the first place.

The General didn't live to see Fred marry the opinionated girl with the nasty attitude. He never knew his grandchildren—couldn't have imagined his coffee table would live at the center of their lives: an arena for games—chess, poker, scrabble, wrestling; a place to open the atlas, a jig-saw puzzle, the finger paints, the papier-mâché; a hide-out, a fort, a train, a plane; and the stage for a toddler's impromptu performance of "Finkel finkel yittle ta." Cultures in collision, lore vs. history, it's almost as if the table had been built for the General's grandson, dancing…

‹ "Writing: A Sweet Release" by Diana Raab up "Mahlapane's Story" by Jerry Eckert ›