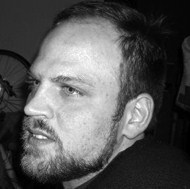 Linwood Rumney's poetry has appeared in Quercus Review, Cold Mountain Review, and The Aurorean, among others. He teaches writing in Boston, where he is an MFA candidate at Emerson College. He recently completed a stint as the poetry editor of Redivider and is the 2010 recipient of the fellowship in poetry from the Writers' Room of Boston.

Half the trees blossom in this old apple orchard.
The rest never bother having died years ago
though they refused to lie down. Wolf River, Empire,
Red Delicious, even Crab Apple—but no one
comes to harvest this threadbare abundance, except
boys in late summer swinging baseball bats at each
other's wild pitches and laughing at the acrid
spray of unripened flesh. And still later, after
first frost, and after the worst blizzard, haggard
and starving deer stagger in like old women
at slot machines, dredging for whatever small fortune
they can claim. Come Spring, it is easy to distinguish
the apples exploded by the boys' surplus
of violence from those gutted in the deer's
desperate hour. Where hoof and tooth could not
retrieve the fruit from winter, half eaten apples
seem to bloom as the ice that held them recedes.
These small hemispheres emerge heavy and ruddy
with the bitter perfume of the abandoned earth.

‹ Four poems by Kelle Groom up "Cormorants" by Marcia Golub ›