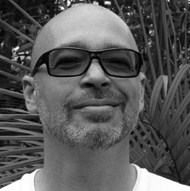 Scott Brennan, an artist and poet living in Miami, Florida, earned a BA in English at Truman State University and an MFA in Creative Writing from the University of Florida. Completely self-taught, he began painting in 1995. Scotts artwork has appeared in a number of magazines, including Big Bridge, Unlikely Stories, and Gypsy. The Boston Modern Orchestra commissioned his illustrations, and he created cover art for David Koehn's Coil and Michael Rothenberg's Jujitsu with Others. His work has been exhibited at the Diana Lowenstein Fine Arts Gallery and Luna Star in Miami and at the Brattleboro Arts Center in Vermont.