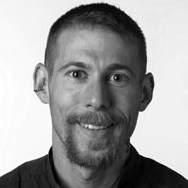 Benjamin S. Grossberg's books are Underwater Lengths in a Single Breath (Ashland Poetry Press, 2007) and Sweet Core Orchard (University of Tampa, 2009). A chapbook, The Auctioneer Bangs His Gavel, was published by Kent State in 2006. Other 'space traveler' poems are forthcoming in New England Review, The Missouri Review, Bellingham Review, and American Literary Review. He teaches at the University of Hartford.

Picture this: on a planet at the edge
of a spiral arm, a kid brother leaves
an apartment. And never comes back.
As if the apartment door opened onto
the pull of space, and he fluttered out here,
arms and legs spread wide like Vitruvian Man—
like a kite diminishing against the sky
until the string snaps. Picture the phone
ringing in his apartment, the empty
efficiency unkempt, a cereal box, banana
peel on the counter, work clothes in a pile
on the love seat, a button-down grayed
by urban heat. Decades follow, searches
flare up: newspaper ads; detectives
hired; internet scoured. But there's no way
to pull a body back from space, no finding
once it drifts beyond the first star, rips
the membrane between here now
and then gone. In the bluish light
of planet Heaven, father wakes
to his brother: twenty (as remembered)
in a scrolling, opalescent gown. Or
maybe he finds him in living faces,
the additive heaven of too much
aluminum accumulated in the brain.
It's hard to know how these things
get passed down, but clearly they do.
Sometimes I see him—tumbling
like a handful of jacks, revolving
Vitruvian Man—beyond my portal window.

Heaven is yesterday, which is why
all stories of a Fall involve a new
sense of time. But The Heavens
are up or out, which is why
travel pushes them further back:
beyond oceans, planet, stars.
Both are mythically peopled—
gods, angels, idealized versions
of ourselves, fantastical aliens
(say, one head, two eyes, three
colors on their traffic lights)—
and both promise to answer nearly
unposable questions: what happens
when you die, or travel faster
than something really fast? Also
both lay claim to certain mysteries—
how the universe began and how
(when) it will end. The generous
among us imagine travel
along a third vector—inward,
inside—might answer these
questions too, but there aren't yet
rocket ships to go there.