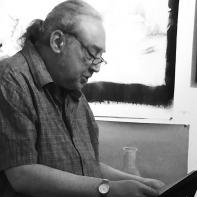 I have been collaborating with painter Laura Bell on the “Corpse” series since 2005. I was partly inspired to initiate the series by the collage methods I was using in my poems. I have always been fascinated by collaboration in art forms such as painting and writing, which are usually solo endeavors. The Corpses quickly became a more ambitious project than I had at first imagined.