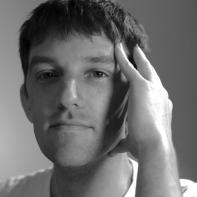 Christopher Nelson is the author of Blue House, published in the New American Poets Chapbook Series. Among his honors are fellowships from the Jacob Javits Foundation and the Poetry Society of America. His poems have appeared in Best New Poets, Bloom, Fairy Tale Review, The Good Men Project, Spork, Voca, and elsewhere. Since 2008 he has edited Under A Warm Green Linden, an online archive of interviews with poets. He teaches at William Penn University and in the summer workshop series at the University of Arizona Poetry Center.

Mother is younger than I am now.
In memory, her physical beauty
immune to time. She weeps in a way
I haven’t seen: these aren’t the tears
for the dead parakeet, not the tears
from Father’s brandished words
or from being unable to forgive
herself for some imagined offense.
On television, the football game
is interrupted. The announcer speaks
solemnly: John Lennon shot,
rushed to the hospital, dead
on arrival. Father holds her,
staring at the carpet. A new decade
is upon them. Forty-nine seconds
then the game resumes,
the great grid precisely chalked.

Everywhere you look there are lovers,
arm in arm on the promenade,
laughing over ice cream,
placing gentle kisses, nuzzling
their faces like creatures of the forest
into the cherry blossoms
which have just begun to come undone
and now confetti the blue air,
not unlike, on the other side
of the globe, the snow of ash
that dusts the cowering lovers
as smoke chokes the hills of figs
before the change of flags.