A Poem by Nancy Chen Long 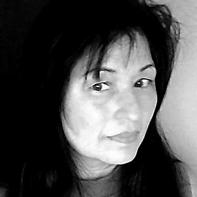 Nancy Chen Long is the author of the chapbook Clouds as Inkblots for the War Prone (Red Bird Chapbooks, 2013). You’ll find her recent and forthcoming work in DIAGRAM, Sycamore Review, Mason’s Road, RHINO, and elsewhere. She received a B.S. in Electrical Engineering Technology and an M.B.A., worked as an electrical engineer, software consultant, and project manager, and more recently earned an M.F.A. As a volunteer with the local Writers Guild, Nancy coordinates the Lemonstone Poetry Reading Series and works with others to offer poetry workshops. She’s currently employed at Indiana University and lives in south-central Indiana.

or hardhearted mar, some telltale cicatrix that consumes
her attention. She needn't chisel very far

in the sheetrock. Always that jagged piece
of rubble needing to be unearthed,

until she is able to finally feel
it. Smooth enough to swallow.

A common stone herself,
she often inspects the same wall,

one widely distributed across many rooms.
Take, for example, the shared wall

of the living and dying
rooms where one wouldn't expect

to be able to excavate
a heartful of malachite.

I can think of no greener stone,
she might say. It reminds me of the greenest grass,

wouldn't you agree? For her sake, let us say yes.
From her mouth, the rock collector might manufacture

a hand or a heart, a north or a south, beliefs
that seem to bear true for a decade.

We are not fooled. We see she is stone—
masked, holes for a mouth and a heart—a green

that shines for a few years, maybe even ten.
But her heart is still just a hole.

Only the most excellent quarries, she’ll say.
Isn’t a stone worth living for?

Tell her it would be a mistake. Tell her
in ten years, she’ll be like all of her walls—pocked

with holes. She’ll demand proof.
It's only then that you should take her

to the garden on the other side of town,
the garden where no one she knows goes,

where the two baby stones sleep
side by side, both with their polished marble

hearts, their malachite mouths,
both swaddled in the greenest grass.

‹ A Poem by Muriel Nelson up Two Poems by Natalie Easton ›