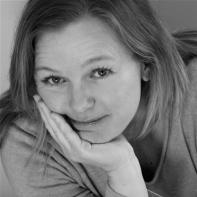 Patricia Caspers is the founding editor of West Trestle Review and poetry editor at Prick of the Spindle. Her poetry has appeared most recently in Quiddity, PANK, and Fjord’s Review. Her full-length collection In the Belly of the Albatross is forthcoming from Glass Lyre Press in September 2015.

It isn’t something you misplace— a piece of galactic puzzle
slipped into the pocket of a too-small winter coat and forgotten.

You wake in the night and try to capture the air,
some sort of July firefly you can’t swoop into the mason jars of your lungs.

But your lungs are not glass; they’re tissue, muscle and cartilage,
millions of capillaries waiting  for that old magic trick of oxygen.

The night we raced through the mountains, winding fast down sugar pine-lined roads,
the sky, black before us, was no comfort with its bright spectacle of constellations.

Each breath you wheezed became our rosary as we carried you
across the empty hospital parking lot, and I thought about the small mystery

inside of you, struggling to hold onto this life, this body-machine.
It’s everything I know of god.

In the welting wind my love
rasped the waxed frames clean,
and from his cold, gloved hands
offered candling pearls:
wing-paned, chocolate dark,
a linden scent.

Spring midnight, our bed empty,
I found him hive-sleeping,
his shorn hair moon lit, static heavy.
I spied until the sun drew a golden thread
across the mountains,
watched him rise with the grist,
dawn-dancing.

All that season he was a swirl of apple blossoms.
I tried to catch the petals like snowflakes on my tongue.

When the leaves were unfolding origami
he breathed a feral wine,
smudged the house with pear cinders,
ever-humming hosannas in his sleep.

Anniversary eve, I bathed myself
in clover water, cottoned my body
with honey perfume,
waited beneath the bridal quilt.

But I was too late. Queen charmed,
he battered at locked windows,
the force of his desperation
a twilight tapping that reflected
small, blue sparks in the glass.

Morning-grieved, I heard
the distant call of a queedling shrike,
flung wide the window,
and tore away the screens.

Riveted here by a storm-addled kestrel spied beyond the glass,

even her breath on her back. And yet she’s bested.


In her contraption, Millie shouted words of flight into the clouds

as if stitching the skies with precious stones, as if she’d become canary, uncaged:


I turn this lexicon on my tongue as one might worry the rosary.

It echoes hollow: bones of blackbird.


“Lady Icarus” folks whisper, but she knew better than that wax-winged fool, knew

the peril in a belly weighted by devotion.

of searching oceans for a single drowned feather.


But I wager she’ll return

in a buzz of delight, with a wave of her wings and a chandelle flourish.

‹ Four Poems by Nicole Rollender up A Poem by Susan Grimm ›