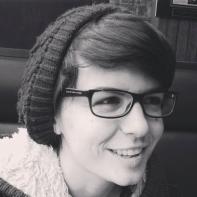 Kerry Cullen is a literary agent's assistant at Curtis Brown, Ltd. Her work has been published or is forthcoming in The Rumpus, Luna Luna, and Fiction Southeast. She earned her MFA at Columbia University, and she lives in New York.

Tonight, after years of preparation and training, my daughters will go alone into the forest.

Katya is six; Petra only four, but she is easily is vicious as her older sister—maybe even more so. It is foolish and greedy to hope that togetherness might save them both. They have trained for four and two years, respectively, accompanying Peter on his hunts. When they come home each night, I have prepared for us the food that they brought back the day before. I smell like cooked meat, always, and they, like raw blood.

When the girls scurry in today, tripping over each other in their hunting boots, their braids streaming behind them like whips, they race each other up the stairs to the bath. They like scouring themselves clean as much as they like traipsing and hurtling through the mud. They are as of yet amoral creatures, and have not chosen one way or another way to be.

Tonight, they will choose. They will go, armed with only their hunger and their will to survive. They will take on the beasts by themselves. We are a wrathful culture, and only the ruthless among us are permitted to stay.

Now, Peter looms over me, his grin wide and cracking, blood spattered over his face and chest. He backs me into a corner and kisses me so my head presses back against the wall. His fingers smear dirt over my oil-stained apron. The both of us have made our choices.

We hear their laughter, high and hectic, tumbling down the stairs, and then they follow, Katya ahead. Her first lost tooth is already growing back in, strangely dull and flat in her impish face. She halts a few feet before the table, crouching as if suddenly wary, then Petra flings herself in the air, landing on her sister’s back, digging her little fingers into Katya’s little shoulders. Katya sways with the new weight but sticks, whirling Petra around faster and faster until they both fall on the ground. They wheeze with breathless laughter.

“Mama, see?” Katya says, while Petra clambers up to her feet. “We’ve been practicing.”

She mimics gnawing the air, a length of imaginary living hide gripped in her small fists. She clamps and locks her jaw the way her father taught her, growling through clenched teeth.

Katya stands back a step, staring.

“And what are you going to do, Katya?” Peter asks. His tone chides. She stands up straight, shoulders back, thrusts her bony chest out. “I am going to watch my sister.”

It is too late for Katya. Petra is the killer of the two. When she was born, she gnawed the umbilical cord apart by herself, then fell upon my breast. I held her close, keeping her warm, whispering into her ear that I would keep her safe. Peter looked down at the two of us as if we were both his children.

Katya was two then. While Petra suckled with such vigor that I felt both milk and blood drain out of me in thin and helpless streams, her older sister played in the corner with six apple seeds that she had extracted from a core before dropping it daintily into our trash bin. She had named all six, and her voice as she narrated their humdrum lives was so soft it sounded toothless, so low that I could not discern syllables at all.

When Petra became old enough to eat apples, she devoured them whole in huge chomps and greedy gulps, cores and all.

As night falls, the girls curl up by the hearth while Peter sits in his chair and tells them the story of his childhood hunt. I am from another country, and though I love their history, it does not run in my veins. I prepare meat for the next day, marinating torn strips in cloth bags, rubbed with spices. I run hot water over my fingers to un-numb them, dip them in tallow to stop the skin of my chapped fingers from breaking open, my weaker blood from running into the sauce, thinning us all.

Without irascible strength, we will be erased. I know this as well as anyone. I came here to learn brutality, to become safe. I am the last of my culture. While the others fell, I watched, and then I ran. That is why I stay here, though I cook and do not hunt, though I bore a child who does not leap upon the backs of beasts. I know that I belong because I stay. I know that I am brave because I am.

Peter will tie his shoelace, thin and frayed, around Petra’s tiny bicep before they loose themselves into the raging woods. Katya will have the grace to pretend she doesn’t see. We all know which one he’s betting on, and neither of us blame him for his choice.

And so, while our girls battle with the roaring forest, as it has always been, as it must always be, as Peter leads me to their trundle bed, and then collapses sobbing on my chest, I will climb on him, my long hair loosed from its kitchen bun and falling in a tangled pelt over my shoulders. It is I who will straddle him and coax him alive. I will pull him from his own weakness, yank him out so fast and terribly that he forgets it happened at all.

When we wake up to the sun-stained morning and the one small fist rapping on our door, when we lurch out of bed, exhausted and terrified, and tumble after each other down the stairs, Peter will halt cold. I will run past him to fling open the door. Katya will step in, breathless from running, her front spattered in blood, her face as stiff as an unbreakable stone.

‹ "Mi Brooklyn," by Julia Lichtblau up "Hopeless," by Michael McGuire ›