A Poem by Ephraim Scott Sommers 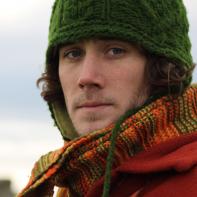 A singer-songwriter and poet from Atascadero, California, Ephraim Scott Sommers is the author of The Night We Set the Dead Kid on Fire (Tebot Bach 2017). Having received his PhD from Western Michigan University, he currently teaches on the Graduate Creative Writing Faculty at the University of Central Florida.

Amen is an end I will not say because I see
Ryan’s memory in sound now, and I am a wall

in a cheap apartment to echo grief against.
As if he were a crossbeam, I’d keep asking him

how much more d-minor he could hold, his lap-
steel and its sugary, slow, lazy groan barely curling

an answer into the hallways I left open in chords
for him. Into an empty patio in a bar of music, Ryan

whispered a toothpick, a blade of hay, a suggestion,
so much air he’d never go all the way into. Ryan chose

to be the breeze, only heard by what it touches.
The poem, too, tends toward silence. It has been like that

with our lives—Ryan dead in California,
and my acoustic sleeping stringless in a Michigan shed.

A silent musician is neither hero nor coward.
There is being human to shoulder, we remember

this. There are wakes to stand through, yes,
and Ryan’s end was Kenny and Jeff cutting him

down from the ceiling, as any end seems
some other silence to look forward to, the band

breaking up, the congregation dividing,
each member gliding solo down their own tired

little denouement. As an ear, now, a left-behind,
I must go feeling around for the sounds, for the prayer

of the next field where the leaning gate is
wide open, fence, unfinished, the melodies

innuendo-ed like I imagine Ryan’s always wanted them.
Everywhere, feelings hang in the humid air like masks

at a costume shop for me to try on and play through,
and which one to choose for which song the world

sings me—the siren way off, the evening
plunging down, the train losing itself with distance?

How many lifetimes I’ve gone out, been up
all night in my Plymouth, looking, lifetimes

steamrolling and parachuting whatever anyone’s got
if it gets me to wherever quicker, and I’m going

to keep dragging my body through this. I’m going
to start loving the worst in myself. Call it going

after the dead, call it A-Town, call it ours,
but whether I’m driving or you are,

whether Ryan’s on my lips or your dead are
on yours, we’re going to keep our restless heads

in motion and the pedal pinned because we came
here for a vehicle to get us to God,

we discovered our search was never finished
with us, and we are only beginning to live.