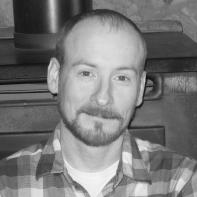 Matt Muilenburg is an English instructor and writing consultant at the University of Dubuque. A graduate of the Wichita State University M.F.A. program, his creative nonfiction has been featured in Southern Humanities Review, New Plains Review, South85 Journal, Mojave River Review, and Flyover Country Review. His fiction has also been featured in several literary journals. Matt lives in Iowa near the Field of Dreams with his wife and two sons.

There used to be a sonogram photo tacked to my colleague’s office door. For the most part, it was your typical facsimile of a fetus, a preview of the coming attraction, a hodgepodge of dots and doodles, tendrils and tentacles, a could-be clavicle here and a maybe-baby penis there. Black. White. Occasionally gray. Just like the world into which it was about to skinny dip. A sonogram, to those with minds unburdened by impending parenthood, is the would-you-look-at-that half-breed bastard of a snapshot and a Pollack, an unorthodox smear of cuteness usually reserved for scrapbooks and baby books. Not doors.

Still, I understand my colleague’s reasoning for tacking this particular sonogram to hers: in the middle of the picture lies a keyhole-shaped white blur. At first glance, it appears to be just another unidentifiable fetal gizmo, a foot, a stomach, a nub of umbilicus masquerading as a post-birth necessity. Upon closer inspection, it becomes apparent that the shady murk is, quite literally, a big ole thumbs-up, an inside look at an A-OK, a well-timed gesture from a Fetus Fonzarelli.

Students and random strangers often strolled past the photo only to return and gawk. They melted at the sight of the utero gusto the fetus flashed just as the ultrasound technician snapped the picture. I, too, stared at the photo when I first saw it, and even though it was taken down some time ago, I still think about what the thumb may have represented to those who gawked.

My first thought was steeped in the political correctness movements of my childhood and the ideas I was taught during that social transition into apropos vagaries. The Nineties were a time when stewardesses became flight attendants, mail men became mail carriers, and I became aware of how damaging lingo can be when not crosschecked by common sense. I was born years after the most famous civil rights movements and raised in the ripples they created, each wave dragging equality closer to shore despite anchors of sexism, racism, bigotry, and hatred keeping them from forming a fast-enough current. Due in part to these social shifts, I didn’t allow myself to initially consider the sonogram’s cuteness, but worried, however mildly, about who it might offend, namely the women on campus who were unable to become pregnant. Did that sweet, little thumbs-up depress them? Did it remind them of what they wanted so badly? Was it a kick in the gut, a flick of the fallopian?

I did once manage to sneak in a bit of optimism – Was it possible that the optimistic thumb foreshadowed these women’s own future and encouraged them to keep tracking their body temperatures and syncing their sex life with their cycle because one day it would happen? – but my overriding thoughts slanted toward worry.

I vexed myself with these questions and did so without considering the parallel in my own office. On the bookshelf that faces the hall, sits a picture of my boys, four and two at the time, lying on the floor with their heads resting on their hands; they’re shirtless and fearless, flashing their gapped smiles and baby blue eyes. When I brought the picture to work, I agonized more over where I should place it than what it could represent to others. In the time since, I’ve brought my boys to campus a number of times. Each time we visit, I introduce them to those we come across – students, peers, colleagues. Everyone. My sons shake these people’s hands like I taught them to, all five of their fingers gripping the other person’s hand like they’re pulling damsels from distress. The gesture is real, a tangible thing, not some hypothetical split second of black and white coincidence that my colleague tacked to her door. And yet that is what I obsessed over – a picture, not of a stereotype or an artist’s rendering of some blonde joke, but of an unborn baby. I worry over a picture and how it might offend someone who wants nothing more than to be called mommy or daddy, but have no issue with telling my boys to remember their manners when they’ve finished shaking these people’s hands.

After all, I don’t want them to be rude.

‹ "Buona Fortuna," by Louise Turan up "Love for Soothsayers," by Melissa Wiley ›