"I Found It Hard, It's Hard to Find," by Sean Hooks 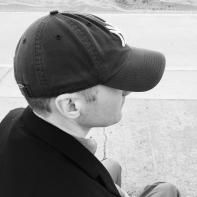 Sean Hooks was born and raised in New Jersey. He has a BA-Liberal Arts from Drew University, an MFA-Fiction from the University of Nevada, Las Vegas and an MA-English from Loyola Marymount University. He currently resides in Los Angeles and teaches at the University of California, Riverside. Recent publications include Los Angeles Review of Books, The Journal, Intellectual Refuge, SubStance and FORTH. He has written a novel and is hard at work on a follow-up, and he is also working collaboratively on the development of a web series.

I Found It Hard, It’s Hard To Find

She was callouses and early courtship. Her childhood employed her as a firewalker who wrote stories about impossible things. “Magical Realism is the technical term,” Mrs. Donnelly later told her. Her parents grew her up all commune and kibbutz and even now in her weekday Nordstrom pantsuits and weekend Juicy sweatsuits you could tell by her rough-hewn nose that she was not born into a world of conditioned air but of long outdoor days and a beauty destined for the adjective ‘earthy.’ Her name was known as referring to a seer destined to go unheeded, the daughter of a proud Trojan king, and the smell she emanated was citrus, a Floridian moved north to the tri-state area.

He was Auto Shop and Wood Shop and push-ups. His parents were teachers and he, never particularly bookish, was shocked when in his thirties he recently became one himself. Custody of his own child had not been granted. “My vindictive ex,” was how he began barroom anecdotes but he knew he was the one at fault—adultery, a grown-up’s sin. Jason Jeffrey, but he never went by J.J. The openly gay Theatre teacher went by J.J. Jason did not engage in hatred or discrimination or bigotry, but he scoffed at those he saw as unmanly men with the bemused condescension of someone who’d always been handy, more dexterous than you, early with the facial and pubic hair, telling virginal classmates what sex was like. His favorite part was always the feminine gasp. Not of pain—he wasn’t a sadist—he just liked to hear that penetrated gasp of certification.

Everyone was dancing except the two chaperones: the principal and the Phys Ed/Driver’s Ed/Mechanics teacher. The high school was in northern New Jersey, equidistant from Paterson and Rutherford. He eye-scolded a couple for holding body parts that weren’t hands and squeezing them like they were testing fruit. The teen girls didn’t turn him on. Uneasy and unready and unclear, all awkwardness and angles and fledgling breasts; they were so obviously children. He never really was one himself. He could separate and silence the overly affectionate with a glance, and of this he was proud. He swore to himself that his own daughter, Therese, now in her last year of middle school, would not be overprotected. He knew from experience that the ones who were most sheltered and prohibited were the ones who rebelled the hardest with their vaginas.

The punch bowl resided in her sector, and making sure it remained spikeless was one of her tasks. She tasted only sour mix and smelled only a hint of cinnamon, but she worried about direr contaminants than booze—a teenage malefactor with a dropper of Rohypnol or a dose of acid. She gave leeway to the more mature students, the reindeer girls and the huskydog boys, letting them pet and play grabass in the darker corners of the decked out gymnasium as long as the canoodling remained innocent. She eyeballed the bathrooms, making sure couples didn’t disappear behind the same door. Cigarettes she didn’t care about and the only weapons she’d ever confiscated were totemic; a sophomore’s Swiss Army knife, a senior’s can of mace. Cocaine snorting, however, was now dutifully policed. As much as she had hated to incriminate and blame, to expel and exile, that time last year when she caught Becky Arasin and three older girls in the back stairwell with Nietzschean pupils and frothy white nosebleeds was quite an upsetting evening indeed.

Their eyes met across the dance floor. It was like magic without the realism. Like an affair. Like a Greek tragedy. Like a bored bartender. Like hippie ideals. Like a daughter you only saw on weekends. Like parents who thought they were gypsies so they taught you to walk on coals. Like the sprouting of hairs from previously unhaired parts of the body. Like the sprouting of those comfortable monochromatic sweatsuits which rose to ubiquity in the early 2000s. Like the smells of sawdust and orange juice. Like the way the two adults smiled at each other in the dim light of the first dance of autumn. Like how they waited for the hip-hop and the electronic music and the slow ballads to end, and when the rock song that defined the decade when they were in high school came over the speakers, they hoped for collision and joined the dancing.

‹ "Axiom of the Empty Set," by Saramanda Swigart up "Castle," by William Cordeiro ›