A Poem by Susan Grimm 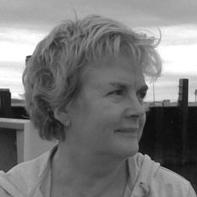 Susan Grimm’s poems have appeared in Blackbird, Poetry East, The Journal, and other publications. Her book of poems, Lake Erie Blue, was published by BkMk Press in 2004. She also edited Ordering the Storm: How to Put Together a Book of Poems (2006). She won the inaugural Copper Nickel Poetry Prize (2010) and the Hayden Carruth Poetry Prize (2011). Her chapbook Roughed Up by the Sun’s Mothering Tongue was published by Finishing Line Press in 2011. In 2014 she received her second Individual Excellence Award from the Ohio Arts Council. She blogs at The White Space Inside the Poem.

What I was then was an endangered species. Ferret of civility. Whippet of dishwater and disbelief. My body trembled with wanting.

Thunderstorm in a bright sky. I called it to me and looked away. Dressing up in basements and giving some tongue.

The new world started with qiana (stretchy) for all our floor-length gowns and disco shirts.

Sexual hopscotch. And outside the world shining and the future echoing away. I could only hear my body. My skin rubbing up a buzz against the air.

Horizontal. Cigarette butts in the specimen drawer. And then balloon, carefully chosen and chosen twice.

Picture this. Double stroller. Kindergarten and all you know like a comic strip under this poem. Some kind of transformation but not like the Greeks (half-woman stalking the grocery, harpy feathers in the wash machine).

Antic figures. After the shy flowers on the mystery vine, this is the caption. To my surprise.

‹ Three Poems by Patricia Caspers up A Poem by Susan Rich ›