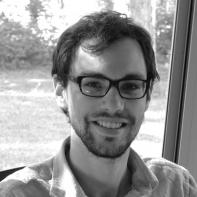 Austin Kodra holds an M.F.A. from Southern Illinois University Carbondale. His poetry was a finalist for the 2014 Moon City Poetry Award, and his writing has appeared or is forthcoming in The Adroit Journal, Harpur Palate, Connotation Press: An Online Artifact, Still: The Journal, Mason's Road, Barnstorm, Animal: A Beast of a Literary Magazine, Prime Number Magazine, Valparaiso Fiction Review, and elsewhere. He lives in Knoxville, TN, where he still hasn’t quite figured out what he wants to do with his life.

In What Could Only Be Suffering

From front porches, the other mothers and fathers
have called their sons and daughters inside
from the churning blue machinery
of night wheeling into place.

Where is the last boy left outside to go now,
abandoned in the honeyed buzz of streetlamps?

All these summer dusks the same,
and until tonight he hasn’t wandered,
only slouched with legs sprawled in a dirt patch
in the park and scrawled his kingdom
from scratch with a twig until it was too dark
to see: Canopied forest, copper filigree,
monkeys carving laws into soft bark—
dusted clean each day by bike wheels or shoes.

To the other mothers and fathers
who must know his name
is not the echo of any call,
this absence must seem lonely, tragic.
Over pork chops they imagine
what happened in his home,
discuss it in bed before hitting the lights.

So what makes the boy decide,
on this night—instead of building something
to be brushed away—to follow darkness
to the neighborhood creek
where not tonight but some nights
the older boys sneak swigs of clear liquor
and slur about girls they believe to be women?

Why, when he finds on a muddy bank
a bullfrog moaning open and shut
the bag of its throat, does he spring free
the pen knife he stole from his father’s fishbowl
of wishing pennies, its blade snagging a gleam
of moonlight off the still water?

Why, if not hungry or threatened
or playing to a pack of leaders,
does he cloak himself in the blue-black,
scoop the slippery mass in his fist,
grip its back legs, and skim the sharpened edge
across each inch of skin as the damp body
writhes in what could only be suffering?

If the other mothers and fathers saw
they’d say the boy has a rage that’s silent
and spreading like lichen up a tree.
They’d shake their heads,
wonder who’d been drunk or negligent
and fear their own to be next.

But the truth is nobody sees.
Nobody witnesses the care,
the precision, the fine slit across the neck,
the pleasure of deepening a fissure in flesh
like locking puzzle pieces.

Nobody is there when the chorus
of his forest kingdom dies,
when he drops the lump
that used to be frog, leaves it to rot,
its warm blood black and begging
from the near-invisible wound he’s made.

When it's your turn, you stand
in the middle of the road
while the other boys
skulk behind a tree
on a neighbor's lawn.

It used to be enough
to whisk the world to a pulse
and collapse on the grass
while the sky spun away,
but now the wide road
holds you straight.

You bow to it, huff its black residue.
Deep breaths. Twenty in, twenty out.

As the countdown closes in
on zero, you have no idea this
will always be a part of you—
this need to become shadow,
this compulsion to shed your body
in a heap of water and bone.

But you’ve seen the other boys go,
which is all the convincing it takes.
So when the count reaches nothing,
you rise up and trap the last breath
in your chest, grip your neck
where the blood pumps

until the other boys are ghosts
swaying in tree-limbed dusk,
until the numb and night flood in,
until you are little more
than a falling curtain, a shake of salt
dissolving back into the dirt.