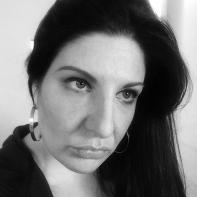 I used to list my sins,
whispering them in the shower
so I wouldn’t forget any stinging
one before confession. When I prayed
my penance, I knelt on the wood floor,
not the padded kneeler, sweet Lord,
I prayed hard, in the desperate way
I did years later in Chartres’ astonishing
grayness, where I fit bare knees
into grooves, the marble cold
as centuries of pilgrim bones.
I knew I could die at any moment,
lost from grace, but desire kept pinning
me to the bed. My tongue, caught
in the world’s breath. And because
my voice wasn’t made for singing,
I kept my mouth closed, whispered
when we’ve been there ten thousand
years, so only the invisible
and their shining heard me.
Something happens though, after
you birth a child, then two:
your breasts leak and your back
heaves from carrying them through
the night hours. The body becomes
the burden you are sorry for.
I count heartbeats, and trust no one.
Because I know I could die in my sleep,
as could they, I consider what I say
to God now, that I believe he didn’t
want to leave his body. That he had
a mother who couldn’t stop his rib cage
from unclasping him. I watch God
with one eye, as I rock a baby, this loud
body-psalm of need the only holiness
I know.

It wasn’t the way her clavicle pushed up, a cross-piece
inside her breast, a swallowed plow’s furrowing
to the end, or endlessness. Rather, it was her right, left-open

eye – the blue watering iris, the startled center, sweet shattered star, and tears
under the other drooped lid. Yes, all the Victorian mourning scenes
are the same: ornate urns to memorialize the body’s

decay, stately elms and oaks, sorrowful thistle, ferns for humility
as we gaze up toward heaven. And always a young
woman crying, a willow tree hung over her,

mimicking the grace assigned to her grief-bowed spine.
As if the living left to mourn take on a form
of holiness: What if you don’t mourn the dead,

if you really don’t feel anything like sorrow at all? What stopped me
was how her body overflowed from that eye, how that push-
pull of whether to stay or go still shined there.

A black angel scrolling her life backward down a well into dark
water where she took a breath, then swam and struggled,
a baby with fish and wings,

and went under. My bones rattled next to hers. I smelled her breath
the warm what’s-left, wanting to see the last and first
thing she saw: snow falling in front of that blind eye,

then slowing. The river between stilling. She sees to the bottom
from the other side, each stone. And she floats upside down, her clavicle
pushed forward, a beautiful prow, now.


You Ask Why I Dream of Cradles

Because the mother-machine of my body didn’t keep
my children safe, sleep never sliced into me many nights,
because these babies slid into their cradles too soon.
My hands held their wrinkled silk skin like my grandmother’s
boiled cabbage wings, my hands also trying to write how it was:
my body failed. My body ground them under its heels.
Say the placenta was half rotted. Say it gave way and the waters
flowed. Say the smell in the room was a sweet white gardenia
floating out. In my hands, their breathing stopped and started.
In my hands, my grandmother’s hands also slowly became cold.
Outside the windows, grief, whatever name we give it, longing, long
heart song, knifed, shimmered, a light I saw everything through.
I mouthed the names of flowers as my hands touched skin:
acanthus, forget-me-not, phlox, sheep’s bit. Because I wanted
to be held or carried along in a river so I could dream,
I prayed to any saint who could grant the impossible:
for my arms to become a cradle, for my bones, a house,
for the placenta, a milk that my breasts could not give,
for my voice, a song made of water on water,
the sound it makes after it pools and runs over
stones, the tiniest of thundering. To be a resurrection
fern that survives through droughts by appearing dead.

Because my grandmother birthed only one
child, I dreamed my mother had three sisters.

Midwives gathered at my grandmother’s death,
she was happy naming them, as her hand touched

each woman’s braids. And my daughter who faded
the lamp as evening slid into the room, chose lunar

mansions for these soft-bellied wraiths, her great
aunts: bearer of children, with her cow’s udder, the root

that binds feet. This was the death scene I invented
for a grandmother who died alone in her sleep,

all 27 bones in each hand clenched when the night
nurse found her. Another woman I read about

or buried. Years later, the woman’s son, a priest
who talked to the dead, lit candles, listened to the row

of crows outside the flames, saying the lost girl
must be named now: Marisol, yoked to me,

Marisol, which means light over the sea. The priest
baptized his sister 27 years after her death,

tossing water and oil into the air between the sign
of the cross. Holding her belly as a hymnal,

down. Dissolved bones singing the way to secret
resting places. I dreamed my grandmother held

out her hands as divining rods—this is what
summoned three more daughters, this hunger

for infants who never formed or took her blood,
for the kingdom she could never hope to enter,

of women who wail for children they lost.
My mother knows she wasn’t enough to make

my cremated grandmother happy, her womb
full of crystallized seeds the last thing to burn.