"Pam of a Gentler Time" by Kate Garklavs 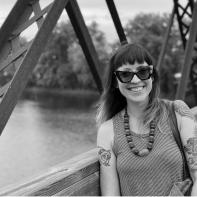 Kate Garklavs lives in Portland, OR. Her work has appeared in Juked, NOO Journal, Tammy, and The Airgonaut, among other places. She earned her MFA at the University of Massachusetts Amherst, and her first chapbook, Diffusely Yours, was published by Bottlecap Press in August 2018.

On Pam’s twenty-fifth quitiversary, we bought her a single grocery-store cupcake, entombed in a plastic clamshell and crowned with pink frosting whose curvature recalled fresh feces. Jim had asked the baker’s assistant to decorate it with a frosting cigarette butt, crushed, overlaid by a red fondant ring stricken through by an X.

“A joke, you know? Add some color to the celebration,” Jim had said. The assistant had looked at Jim like he’d instead suggested sugar-sculpted baby limbs, and so Jim let it drop.

“It’s a gesture,” I said. “People appreciate gestures, if not the gifts that represent them.” We cleared a speed bump and I let the cupcake fall against the clamshell, smudging the lid’s crenellations.

From the driver’s seat, Jim side-eyed me. I continued. “We could always run home and dress it up,” I said, “make a cigarette butt from a straw…” Here, I trailed off. Only professional-grade cake decorations would do. In some ways, Jim is such a perfectionist.

Since his dad died, we’d been visiting Pam more often, a social shift I strained to enjoy and mostly wished, rudely, to end. It’s not Pam I minded, entirely—she was warmer to me than my own family—but instead the social rigidity she represented.

After the first three visits, I knew how all the succeeding ones would play out. Hearing our car, Pam would throw back the door in a raucous show of enthusiasm. She’d be wearing a saggy chenille v-neck in lilac or sagedust or melon—aspirational color of the lingerie of yore—and would still be in need of a haircut. Jim would hasten his pace, rush up to hug her—really squeeze her, as though to convince himself of her frailty, though she was nothing but stalwart—and I’d hang back, fumbling my purse and amping up my plastic for-public smile. We’d troop to the kitchen, Jim and I claiming our respective spots, Pam putting water on for tea. Hers was the same kettle I’d had as a child, domed white enamel marched around by a border of bonneted geese, and it lurched my heart just to see it. My family’s own kettle either sat shelved at a charity shop or lay buried beneath Hefty bags decomposing carrot peelings, roast beef. It pained and relieved me that the two would never meet.

As I wiped my boots—protocol—Pam gave the clamshell a skeptical look.

“What’s this?” she asked. “Cake? You know I won’t burn FlexPoints on any garbage frosting.”

“Yeah,” I nodded. “We wanted to help you celebrate.”

“Celebrate?” Pam said, putting on her mock-quizzical face. “Celebrate what? It’s just Tuesday.” As though the square on her bank calendar weren’t circled and scribbled with highlighter stars.

“Oh, honey,” Pam said, “thank you, but I already celebrated. Bought myself a new bead.” Here, she lifted her arm, rotated her wrist HSN-like to display the addition to her bracelet: translucent pool blue blotched with milky, cloudlike forms. My mind jumped to teenage Jim jerking off in the bathtub—this one, childhood tub, same dilute blue as hospital gowns, pinking with mildew—and I flash-blushed.

“Fancy, I know,” Pam said, gazing into the bead’s bounded abyss. She took the clamshell from me. “It’s overwhelming. Not for the weak of mind.”

“It was the smoking,” she said, “the smoking and the drinking and the processed meats. Body can only withstand for so long.” The phrase, its winking singsong, rattled my consciousness at inopportune moments.

Pam got on well—well enough—without Craig, but she cleaned up her act a little: reflexive superstition. No more Cuervo pre-mixed margs, no more Dilly bars, or so she told us. Her pantry stood up boxes of flax crackers, Celestial Seasonings, solid white albacore in water. Today, she offered us chia pudding.

“Once you try it, you really can’t tell the difference from the boxed mix,” she said.

I nodded, fixing my face in kind ponderousness. Jim battled back a sneer, dipped a spoon into the wear-clouded ramekin.

“Babe,” Jim said, “you gotta try it.” Pushed the dish to a point of pathetic rest at the border of my raffia placemat. I took it up, held it in my hands like prayer, set it in the center of the mat: bullseye. A taste wouldn’t have seemed so grim had the seeds not looked like specialized larvae, the orange light from the halogen incandescents not cast a glow on the pudding’s wet skin. Pam’s hand—divorced from the direction of her conscious thought, a separate spider-veined body acting on independent impulse—sneaked toward the spiraled frosting.

One spoonful. Anyone could withstand one spoonful of anything. I dipped the spoon in, dainty licked the dollop off.

Pam beamed. “I can get you the recipe in a minute,” she said. “But first, I’m gonna be bad and try a bite of this cupcake.”

“No rush.” Jim rose to fetch a dessert fork.

Pam seldom entertained; this I deduced early on from the dust covering the the two spots that weren’t hers and Craig’s. Out of habit, deference, Jim and I took the dusty spots, taking care not to lean our forearms on the table’s edge the days we wore light-colored shirts. That Pam still dusted Craig’s place didn’t faze me; that she ignored the other two remained a source of deep perplexity, given the wan tidiness of the rest of the house. Brass lamps polished weekly, end tables wiped gentle with Pledge. Was the dust film intentional? Some deep subconscious protest against unannounced guests? Or was it merely oversight, a housekeeping blind spot anchored in plain view? The mystery unnerved me. On longer visits, I let myself consider multiple possible explanations before settling on the one I preferred: standard laziness.

“I take back what I said,” Pam said as Jim handed her the fork. “I don’t mind blowing my FlexPoints on frosting. A bite won’t kill me. And,” she cocked her head a tilt, “it looks pretty good.”

“Buttercream’ll get ya,” Jim said. “HyVee’s upping their game, targeting those hipster foodies. Kombooshah and all that.”

“Gotta move with the times,” Pam said, spearing into the cake, sponge yellow and equally soft. “That, or be forgotten.”

I closed my eyes to the sound of contented chewing. In a few minutes, the true ritual of Pam’s quitiversary would begin, predictable and lonely as heartbeat. I held my eyes shut a few moments longer, placing Jim and Pam by their ambient, subvocal noises.

“I can’t remember if I’ve told you this before,” Pam said, “and stop me if I have, but do you all know how I got started smoking?”

“I’m not sure,” said Jim, his response perfectly neutral, blessedly bereft of condescension, as it was every year. It was these moments—the masterful disguising of boredom—and perhaps only these that continued to endear me to my husband.

“Well,” said Pam. “It was back when I was working for PanAm, you know. Back then, they had much stricter standards for us ladies…”

“Standards?” I asked, flat-toned, as I asked each year at this conversational juncture. We knew the script by rote.

“Weight standards,” Pam said, leaden as boots. “One-ten and not an ounce more. They used to have a scale in the lounge where you’d weigh in before your shift. If you were over, you were on probation. If you were over your next shift, it was a week’s leave without pay. And after that? You were gone.”

“Jesus,” I said. As many times as I’d heard the story, the brutality of the policy shocked me anew. “You can’t lose anything in a few days.”

Pam raised her eyebrows. “You can,” she said, “If you’re desperate enough. I never dreamed I’d smoke until I got that job. Everyone did: Jeannie Moritz, Sally Wasfejner. Even Heidi. Oh, hell, what’s her name? Heidi the good girl, even her. Nescafe, no cream no sugar, Capris and a hard-boiled egg for lunch. That was that.” Pam’s fork rested tines-down on the lip of the clamshell, poised to slip.

The sun had set without my notice, and I knew—having snuck from this kitchen dozens of times to walk around the block, a solitary enjoyment—that the three of us stood in rosy relief against the uncurtained pane overlooking the backyard. Momentarily, Pam would sigh, tighten her clasp around her mug to absorb any radiant warmth remaining. Then, the long sad recounting of successive events: ditching the Capris and the body-mass creep leading to the pink slip; blue-lit months in the depressive parlor; People’s Court and Chesterfields and freezer-case eclairs winking with residual moisture crystals; retail stint cut short by plantar fasciitis. Pam would put the kettle on again and “freshen our mugs just a smidge,” and over weak second brews would lament her current status: widowed, semi-retired, infrequently doted on by her only child. Jim and I would nod, hum sympathetic, until the mantle clock ran down the visit. Pam, all complaint and no action. The thought of another few decades of her spiel snapped me awake.

“That’s fucked up,” I said, heartbeat anxious as wings on plate glass. “Really fucked up.” Jim eyed me, schooled as he was in Pam’s abhorrence of profanity.

Pam looked at me then, not past or through but at me, her eyes the watery eyes of a road-abandoned spaniel. “It was a different time,” she said. “Nobody knew any better.”

I was not used to looking at my mother-in-law, not intentionally or directly, and the self-righteous pity of her expression almost backed me down.

Pam reverse-hissed, innertube whine through her chipped front teeth. Our reflections in the window’s black backdrop rested at the bottom of a turbulent pool. Pam opened her mouth, shut it, and reached for the fork, knocking it from its perch of plastic lip. Its clatter on the table the flat-edged tinkle of drugstore windchimes.

Silence broken, Jim stepped swift into action. “Alright,” he said, moving me up, pinching the small bones that formed my elbow. “Getting late for a weeknight. Probably time to hit the road, eh, babe?” Babe: Clumsy imploration that rendered me stubborn as cattle.

I could feel her eyes on me as we picked our way around the planters on her front steps, as we slid into our car seats not talking, not touching: two, three blocks down the street and into the new-minted night, the still leaves glossy under periodic street lamps. I could feel them as we reached our own subdivision where, free of the car, free of forced conversation and goodwill, I stepped beyond the soft border of the porchlight and lit my first cigarette of the evening.