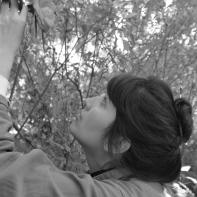 Asa Drake is an information services librarian. Her writing is published or forthcoming with The Margins, American Poetry Review, Prairie Schooner, The Journal and elsewhere. She received her MFA in poetry from The New School and was a finalist for Omnidawn's 2018 Chapbook Competition.

Who relied on my lover died in the county jail.
I don't want you to think I don't love her. I loved her.

She had all her teeth but she lent money through windows.
She walked out of her house. Made herself unlucky.

I walked out of mine. I know the consequences.
A man shouts. A man leans out of the tall steel, asking

after my passport. I don’t remember how these sounds
made a language. Though, the women, they speak

as they brush back my hair. One says “I don’t want you to think
I don’t love you. I just look at your face and know you

were born in some warm, beautiful place.” The sounds I make
don't make a language. I put on sunblock like protection

from one harm is protection. A wasp flies into my hair
or I climb into the hive. We all survive one another.

Except the woman who relied on my lover.
Her troubles were many, my lover tells me.

At the end she had no house.
She entered rooms only through side doors.

I’m 29 and wearing Salonpas. What are my odds for survival?
I don’t want to be survived by the men who don’t love

me. A woman covers my mouth with a hand.
Her paycheck is late because her hands are busy.

Makes her squat like a four-legged creature.
I insist on protection. Pick up an omen the last night of the year.

My lover tells me the Atlantic is big, so it holds its teeth
and the Gulf is small so its teeth are rare.

I'm holding teeth but I don't know the animal.
When I say this back to the lover, he’s uncertain.

He wants to revise. He says that by small
he means the Gulf is shallow, he means its teeth are also small.

We can’t protect from misinterpretation.

My lover pours hot water through a stain
and I wonder what his mother taught him.

Lola tells me to put apple blossoms into her hair

I pay for them in lack of apples. She doesn’t know anything
about how to protect her own life, only her fruit and flowers.
All the time I have been living, Lola's owned our houses
and the houses she didn't own, she owned until she started
to own something else. Every heirloom I could ask for,
Lola fed me. For decades, she’d saved her milk.
I was close to something delicious, but I was unlucky.
For two years, I misspelled my lola’s name on her tax returns.
Now her lender doesn’t recognize her. She tells me,
in the first house the termite lost its teeth, sweet
on the load bearing beam. I’ve lost my teeth,
I tell her, wish that on everyone who does you wrong.

‹ Three Poems by Alison Madaville up A Poem by Christopher Burawa ›