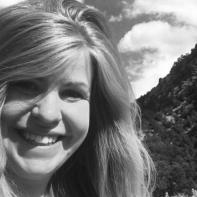 Sarah Bates has an MFA in Poetry from Northern Michigan University and currently teaches at Southern Utah University. Her work has appeared or is forthcoming in Diagram, Boston Review, Fugue, Zone 3, The Rumpus, Best New Poets 2017, Seneca Review, The Normal School, and Hotel Amerika, among others. Her manuscript, O-Six, was a finalist in the 2018 Saturnalia Poetry Book Prize. Her manuscript, Tender, was a finalist in the 2018 Bateau Press Chapbook contest.

Quickening, I Read About the Clam’s Heart

I have told no one what I did in the backseat
of your truck. I have said nothing
to the roofs of my heart about the pregnant elk

looking up at the Patri-archs— a story of animals
turning to bones in the dark. I was standing
on the side of the road in Toquerville throwing up

this whole summer, a gallon of water, the gut pile
and its partial hide
found somewhere in between the Virgin River

and an orange flower. I thought that if I spoke
to you of the soft-bodied mother,
twelve-year-old boys knocking over half a million

hives, a sun who takes the fish out of its own skin.
I thought if I spoke to you of another star
system, my father’s eyes, if you let me speak to you

of heaven even if it doesn’t exist—you would know
what it was like to open my body to it, to boil
water. How this world keeps me from my own grief.

Even in the mountains where you first took me, I am
thinking of the herd of fifty-seven elk and all
the men shooting, the librarians delivering books on

horseback. My species only wanting to become
the flowers themselves, the last living thing
she saw. I love how I am always starting over.