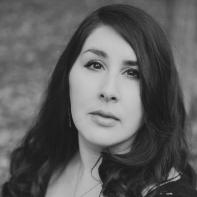 Emma Bolden is the author of House Is An Enigma (Southeast Missouri State UP, 2018), medi(t)ations (Noctuary Press, 2016), Maleficae (GenPop Books, 2013), and four chapbooks. The recipient of a 2017 NEA Creative Writing Fellowship, her work has appeared in The Norton Introduction to Literature, The Best American Poetry, The Best Small Fictions, and such journals as the Mississippi Review, The Rumpus, StoryQuarterly, Prairie Schooner, New Madrid, TriQuarterly, the Indiana Review, Shenandoah, the Greensboro Review, and The Journal. She is Associate Editor-in-Chief for Tupelo Quarterly.

on difference. Every hand shards
into separation, into the fingers
that despite our resistance continue

to thaw being into not. What is
a glove but denial, what is
a sweater but a myth. If

in our mothers’ wombs lived
a god to knit us, then we began
with water, needle, flood. Ask

the river if it believes
in metaphor & the river
answers only ice. If

inside we could hear
the ice crack before it breaks
the branch, could we accept

the soul as the soul
pared from metaphor?
All winter, I hold my own

hand as a point of faith.
I tell myself I can believe
if not in ice, then in breaking.

Laocoön and His Sons

As if from inside the marble the sculptor
heard a keening, gut-ruddered, and with his
chisel answered wildness with wildness until
the block became its blanks, became a howl

revealing a family as three figures separated
by pain, by poison’s impossible patience.
See a father. See beside him his two sons,
mad-mouthed, venom-veined, every human

moment left in them gone monstered. See
the father now unfathered, unsonned, see his eyes
swim only to sky, as if it were a sea inverted.
See him waved and undered by his own ending.

See the story of his suffering as a severance
from anyone’s story other than his own.

Centered in the folds of every fashion
magazine, women body the landscape.
Sweet-littered, matte-lipped, limbs
liquored into twist and line they lay

down, blank as spaces, in junkyards.
We are told this is the way all female
flesh bests. We are told all action is
reaction and reaction a violence unfit

for a lady, so what better ball to gown
than these ruined alleyways? Look at them.
All the girls who couldn’t see a happy
posed their bodies into endings, open as a road.

They’ve learned how one letter separates
anguish from languish, how pretty beds
its own death in a frenzy of thread
petalled into lace, into the tulle netting

their pills into hiding. Who taught them that
their greatest gift, red and lipped, is being broken
into silence? That beauty is the kind of sleep
that dreams only of itself as sleep, as empty?