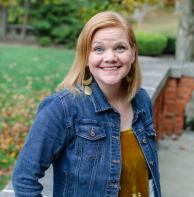 Kelly Sundberg's essays have appeared in Guernica, Gulf Coast, The Rumpus, Denver Quarterly, Slice, and others. Her essay “It Will Look Like a Sunset” was selected for inclusion in The Best American Essays 2015, and other essays have been listed as notables in the same series. Sundberg has a PhD in creative nonfiction from Ohio University, and she has been the recipient of fellowships or grants from Vermont Studio Center, A Room of Her Own Foundation, Dickinson House, and the National Endowment for the Arts.

This interview was conducted via email by Interview Editor Kalista McKeever. Of the process she said, “Kelly Sundberg’s memoir Goodbye, Sweet Girl is marvelous, she’s shows moments of love to gruesome accounts of abuse. Sundberg explores why we stay in abusive relationships and how to survive after leaving them. Her poetic writing pulls you in from the start and leaves you mesmerized. I am incredibly grateful she took the time to participate in this interview.”

Superstition Review: Kelly, thank you so much for agreeing to do this interview. On your website you mention that your memoir, Goodbye, Sweet Girl, was inspired by your essay “It Will Look Like a Sunset.” What made you want to expand on the essay and turn it into a full-length book?

Kelly Sundberg: When I saw the response that the essay had—it is one of the most read pieces in Guernica Magazine’s history, I knew that there was an audience of people who were hungry for stories like mine. Stories that interrogated not just the way that domestic happens in a marriage, but the love that can exist within abuse. But the real reason I wrote my book was because I’m a storyteller, and I wanted to tell my story. I had been working on a collection of essays about girlhood and growing up in rural Idaho, and I came to realize that a lot of that material showed the process of cultural grooming that I had undergone and which landed me in the place where I would stay with a man who abused me. The book is marketed as an examination of why women stay in abusive marriages, but I think it’s much more than that—it’s also a book about girlhood in America, about rural poverty, and about the natural world.

SR: Goodbye, Sweet Girl is your debut book. Will you describe a few of the most salient reactions you have had towards your work? What has been the most rewarding reaction thus far?

KS: There is one reaction that stands out above the rest. A woman, Renee, emailed me and told me that she had read my book, and it had helped her understand her sister more. Sadly, her sister did not escape her marriage, and she was murdered by her abusive husband. Renee spent years fighting for justice for her sister, and her sister’s abuser was only convicted many years later, but it struck me that, as much as wanting justice, Renee just wanted to understand. The day of the Kavanaugh hearing, I was driving to do a reading in Evansville Indiana, and I sobbed in my car. The hardest parts to hear were when people were nice to Christine Blasey Ford—when they told her that she was “brave.” I don’t know why that particular language was what triggered me so much, but I get called brave a lot, and I can say with some certainty that being brave is exhausting. The day after the hearing, I did my reading, and Renee sat in the audience with her two adult children. Her son was getting his pilot’s license, and he had actually flown her there from Illinois to see me. I cried for the first time while doing that reading. I was just so touched to see them in the audience. After the reading, Renee kept telling me that I reminded her of her sister, and I wasn’t sure why. Later, my friend told me that Renee had said to her that I reminded her of her sister because I was “still sweet” after everything that had happened to me. I’m not sure that sweet is the right word for who I am now, but I know that I am still open and vulnerable and loving, and having people like Renee who come into my life and share their own vulnerabilities with me has only made me more so.

SR: Emotionally your story is hard to read. It’s beautiful and heartbreaking. Yet you're able to write with such strength and grace. What was your process for mining your memories and unpacking your own thoughts and recollections? What role, if any, did pictures and other personal accounts contribute to your process of writing down past events?

KS: The marriage was still very recent when I wrote the book, so a lot of those memories were fresh, though when I look at the book now, I realize that there is stuff I should have included that I had forgotten about—mostly brutal moments that I think I had kind of blocked, but which might have illustrated how bad the abuse was, though I’m not sure that the book needs to be any more brutal. As for the childhood stuff, I had spent a lot of time in therapy and talking to friends, so I had kind of turned memories over in my mind a lot, and they became embedded there. I don’t know that pictures were particularly helpful, though I did reference a couple of photos—notably one with Caleb and I standing on a beach in Oregon near a cave, and that cave became a metaphor throughout the essay and the book. I did look back at my journals quite a bit. They weren’t well written (no one is going to publish my journals posthumously), but they did offer me a window into my mindset at the time. I’m honestly thinking of having a ritual and burning those journals now, but I’m not sure that I’m willing to let go of my experience in that way. I feel like maybe I should be, but it’s hard to let go of a life’s history, even if that history was painful.

SR: What was it like for you to relive those memories and write them down?

KS: It was hard, but I think it’s been harder since I finished writing the book. In the survivor world, we use the word “disassociation” a lot to describe the experience of sort of exiting the body during abuse, and I think that I was disassociated a lot while I was writing the book, so I didn’t necessarily feel all of that pain in the moment. The past year since publication has been very hard. I’ve had to relive the memories through a book tour, and I’ve had a lot of residual trauma surfacing that I think I tamped down while working on the book. I honestly just texted my friend who is a therapist and asked for a recommendation for a therapist who specializes in EMDR, which is a kind of therapy that is supposed to help desensitize traumatic memories. The thing about trauma is that it’s not a straight line. Some days, it feels like there is no end point, that I’m just circling around all that has happened to me. I’d love to be more triumphant in this moment. On a different day, I maybe would be, but today, I’m just circling.

SR: What did you edit out of your memoir?

SR: What is most important to you when titling your work?

KS: Ideally, I want my titles to contribute in some way to the story. A title that is just descriptive is a missed opportunity. I chose my title for this book to convey that the book wasn’t just about abuse, but also about the evolution that happened during my life and girlhood.

SR: What was an early experience when you learned that language had power?

KS: When I was in high school, I was the Editor-in-Chief of my high school newspaper. I had a really wonderful teacher who encouraged me as a writer and taught me that my opinions mattered. I think it’s so important to tell young women that they matter.