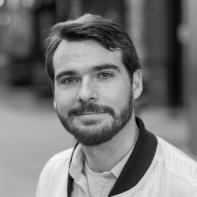 Robert Wood Lynn is a poet from Fauquier County, Virginia. He studied poetry at the University of Mary Washington, where he was a recipient of the school's Academy of American Poets College Prize. His poems have been featured or are forthcoming in American Literary Review, Iron Horse, Kestrel, Leveler, Natural Bridge and other publications. He lives in Brooklyn.

Thank You Notes for the Lesser Kinds of Flight

Thank you, kites, for making it possible
to take the wind for a walk & thank you

whoever tried to throw away a helium balloon
in this trash chute sending it straight to the top,

of a cannon and watched crawl out of the impact crater,
cackling with delight the whole time, like me, like

The Season We Danced Alone While Pumping Gas

Recall the crappy metronome fear made out of the gulps
of the fuel pump, the sniper the news
conjured behind every parked car between here & Baltimore,

nobody expecting to outdance the bullet—just relying
on that old hiking joke: a slow
enough companion & you don’t have to outrun the bear.

Every head bob contagious, every shimmy from the customer
at the next pump, a challenge we were
compelled to accept. This is a dance off now because I refuse

to let someone else’s ducks & sways make my body the path
of least resistance, to let a bullet close
the circuit our parents had opened just sixteen years before.

The season we danced alone while pumping gas you stopped
shrugging off the crosshairs: you’d read
that when you put bugs in a jar & shake it, they fight each other

instead of the thing that shakes them. Let us fight the things
that shake us, you said. You said
if there is someone pointing a gun at us & let’s be clear

there is nobody—statistically nobody—pointing a gun at us
but if there is, are you going to tell them
where to point it, to let your body beg shoot them not me?

The season we danced alone while pumping gas, our homecoming
game was played away, its dance, perhaps
redundant, cancelled altogether. Ten people died before month-end.

That season, I was still ironing every task of driving into habit,
so even now I find myself sashaying
to the pump before I slide the nozzle in & pull the trigger.