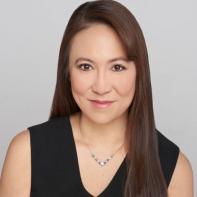 Angie Kim moved as a preteen from Seoul, South Korea, to the suburbs of Baltimore. She attended Stanford University and Harvard Law School, where she was an editor of the Harvard Law Review, then practiced as a trial lawyer at Williams & Connolly. Her stories have won the Glamour Essay Contest and the Wabash Prize in Fiction, and appeared in numerous publications including The New York Times, Salon, Slate, The Southern Review, Sycamore Review, The Asian American Literary Review, and PANK. She lives in northern Virginia with her husband and three sons.

This interview was conducted via email by Interview Editor Nicole Floda. Of the process, she says, “It was such a pleasure to interview Angie Kim. Her writing is eloquent and moving—Miracle Creek was an engrossing, consistently surprising story that I could not put down.” In this interview Angie Kim talks about experimental therapy, how her experience as an immigrant impacted her writing, and her writing process while crafting her debut novel.

Superstition Review: Thank you so much for agreeing to do this interview. Miracle Creek addresses the subjects of autism and special needs parenting with authenticity and empathy. By delving into the backstories of complex characters like Elizabeth, the story refuses to succumb to black-and-white morality. Could you elaborate on why you chose to address these issues in particular?

Angie Kim: As an initial matter, thank you so much for featuring me and Miracle Creek. I love literary magazines and owe a great debt to them, having gotten my start in fiction writing in publishing short stories in lit mags, and I’m happy to participate.

The choice to have address these subjects through two POV characters who have children with special needs (one with autism and one with cerebral palsy) stems from my own experience as the mother of a child with a variety of medical issues. One of my kids was born deaf in one ear and had other health issues as a preschooler, and we decided to try an experimental therapy called hyperbaric oxygen therapy (HBOT), which is featured in Miracle Creek. It was an intense and intimate experience, being sealed up in a submarine-like chamber for forty rounds of hour-long “dives” twice a day with three other children and their mothers, sharing our life stories and medical journeys with each other. When I started writing fiction a few years later, I immediately thought of the HBOT chamber, a crucible in both a literal and emotional sense. What kinds of conflicts would arise if people with differing degrees and types of medical issues were forced to interact, day after day? What would happen if something disastrous happened—such as a fire, which is a risk with HBOT, given the present of concentrated oxygen—and they were trapped together?

SR: One thread that runs throughout the novel is interdependency. A quote that stood out to me was, “But that was the way life worked. Every human being was the result of a million different factors mixing together... Good things and bad—every friendship and romance formed, every accident, every illness—resulted from the conspiracy of hundreds of little things, in and of themselves inconsequential.” The resulting complexity of the trial and its many twists and turns were riveting. What was your process in constructing this intricate plot?

AK: I was a philosophy major in college and studied jurisprudence in law school, so I’m fascinated by the idea that an otherwise-innocuous event or decision can have monumental consequences for the future, and I’m so glad that this aspect of the novel resonated with you. As for the process, it was one of iteration. As much as I like the idea of outlining and figuring out the whole plot at the outset, the reality is that I don’t know what I’m writing until I sit down and actually write it. To appease my type-A need for structure, I did have a skeletal outline at first. After I wrote a chapter or two, I went back to the outline and changed it based on what I’d written. Then I’d go back to the text and write some more, then go back to the outline and change it, and so on and so forth, iteratively the whole time, until I reached the end. The outline I ended up with bears no resemblance whatsoever to the one I began the novel with.

Once I wrote the ending and finally figured out who set the fire, how, and why, then I went back and revised, chapter by chapter, making sure (among other things) to change what I needed in order to be consistent with the plot. In doing this revision, of course, the plot changed somewhat again, so then I had to go back for a second, third, and fourth time, making the changes I needed to make each time until it cohered into a smooth (albeit twisty) narrative.

SR: The novel is a courtroom drama, yet as a reader I found the legal process, as well as defense attorney Shannon’s thoughts, clear and easy to follow. You have previously worked as a trial lawyer and litigator. Could you speak about how your experience affected Shannon’s strategies?

AK: I’m so glad that you asked about Shannon because she was one of my favorite characters to write. My favorite part of being a lawyer was, by far, being in the courtroom, especially questioning hostile witnesses. Trying to get them to admit things that I knew were the truth, based on what I knew from the documents they’d written or things they’d said to other people. I loved trying to figure out their motivations, the psychology of it, and using that analysis on the spot, real time, to craft the following set of questions. To capture this sense of spontaneity, I prepared an outline that a lawyer in Shannon’s position would make, and then let go and wrote the scene without stopping, without questioning word choices or plot implications. It felt almost like being back in court, except better because I could have the witnesses say what I wanted them to say—a trial lawyer’s fantasy come true!

SR: Setting plays a significant role in the novel, not only in regard to the courtroom, but through Pak and Young’s experience as a Korean immigrant family now living in Miracle Creek, Virginia. Why did you decide on the title of Miracle Creek?

AK: Miracle Creek is, as you note, the name of the town where the Yoo family settles and opens the Miracle Submarine hyperbaric chamber. The word “Miracle” was important to have in there because all the characters in the novel are chasing miracles, particularly the parents of the special-needs children. “Creek” because I always saw the wooded property on which the Miracle Submarine sits as having a creek run through it, most likely because I myself sat by a creek in the middle of the woods near my house in Northern Virginia when I first started writing the novel. Finally, I liked “Miracle Creek” as the title because it’s an homage of sorts to Dennis Lehane’s Mystic River, which is a big favorite of mine and which I turned to frequently to figure out plot structure.

SR: You’ve published a variety of short fiction and essays in the past, but Miracle Creek is your debut novel. How was the writing process different for you?

AK: I don’t think there was any difference in the writing process on a day-to-day level. I’m a very slow writer. It takes me days and pages of writing to figure out the right way to begin a new scene, whether it be for a short story or for a chapter of a novel. Once I’ve found the right beginning, the writing tends to flow easier until I reach the end of the scene, and then I go through the torture of finding the right beginning for the next scene. The only difference for novel writing is the time involved. There are many more scenes in a novel than a short story, so it took years rather than weeks to complete the first draft. I often think of Anne Lamott’s story in BIRD BY BIRD about her father telling her brother to tackle a huge project on birds by working on “bird by bird, buddy. Just take it bird by bird.” You just have to take it sentence by sentence, paragraph by paragraph, scene by scene.

SR: When you were a preteen, you moved from Seoul, South Korea to Baltimore. Could you discuss in what ways, if any, your own experiences influenced the characters of Pak, Young, and Mary?

AK: The Yoo family is probably the most life-like of all the characters. My parents and I, like the Yoo family, were very poor in Seoul and lived in one room together. Then we moved to Baltimore, where my parents (like Young) worked and lived in a grocery store in a dangerous part of town, while I lived with my relatives in Lutherville, a suburb of Baltimore. So this situation and the ways it can drive a wedge between the child and the parents certainly informed the Yoos’ living and work situation in the novel. But more than the specific situation, I wanted to capture the sense of isolation and displacement that I felt as an immigrant who didn’t speak the language, wore the wrong clothes, and was the weird kid who didn’t fit in.

AK: I write in a tiny nook in a corner of my bedroom. I think it’s meant to be a storage closet; it’s maybe 7’ by 7’ with a ceiling that slopes down so low that I can’t stand up or even sit in a chair. I sit on the floor in this cramped, windowless room with nothing but a laptop and lots of paper and pencils. The walls are covered with charts, diagrams, calendars, and chronologies, with all the characters color-coded, with arrows and crossed-out scrawls indicating changes everywhere. It looks a bit like Carrie Mathison’s crazy board in Homeland.